I’m pretty happy with feeding my dogs raw. The day after I opened the first bag of freeze-dried Primal Suki walked 6 kilometers, an improvement of nearly 6 kilometers from what she had been able to walk before that. The current accessibility of raw diets, the plethora of premade raw foods available, and the information available now is both fantastic but can also complicated raw feeding. I mean, which premade do you even choose? Or is DIY better? Ratio vs. NRC balanced? Prey model? BARF? How to even switch? Here’s a quick guide to get your started.

1. The meat doesn’t matter.
I frequently hear that you should start with chicken because it’s the easiest to digest. The thing is, my dogs very rarely ate chicken until recently so it wouldn’t have made sense to switch them to both a new diet and a protein they rarely eat. If I had started with chicken and they had reacted poorly to it, I wouldn’t have known if it was because it was raw or if they just don’t do well with chicken. Chicken can also be quite high in fat, and raw is already higher in fat than many kibbles, so if your dog is accustomed to eating a relatively low fat diet, suddenly getting a high fat meal can cause horrible digestive upset if not full blown pancreatitis. See what I mean?
What to do instead: Stick with a protein your dogs are already doing well on. In my dog’s case, it was beef. If I were to recommend one specific meat over another to start with I would say go with turkey. It’s generally a fairly allergy/intolerance safe meat. It also tends to be much lower in fat than chicken so there’s less risk of your dog suddenly getting way more fat than they’re used to. 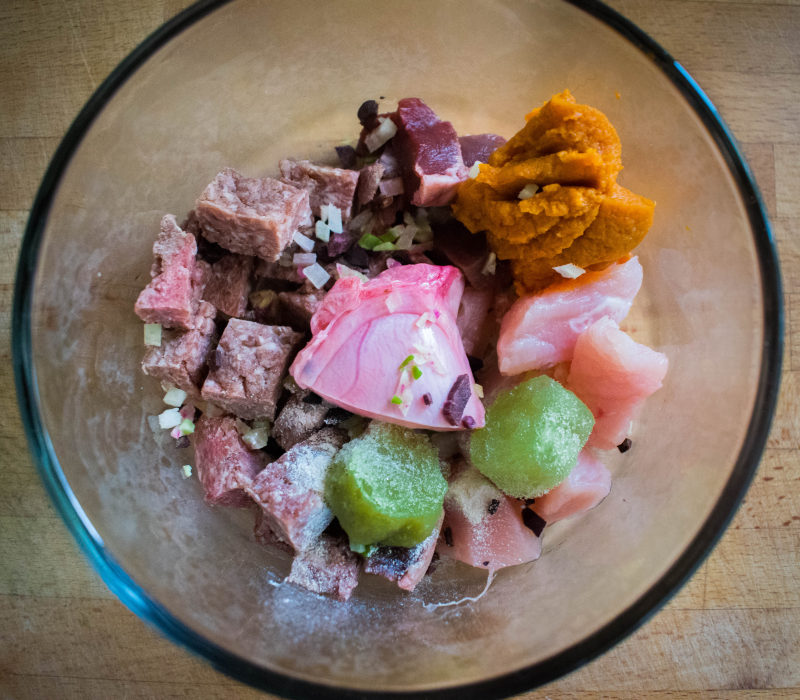 2. Don’t switch cold turkey and go all in. Your dog doesn’t need to suffer through a “detox phase” of vomiting and diarrhea.
Having to switch cold turkey is, I think, the #1 reason all my prior attempts failed and it’s why I held a generally poor opinion of raw feeding for so long. It actually kind of makes me angry how often these two myths are repeated. There is a myth that raw and kibble, or raw and cooked food, can’t both be fed and that you need to switch cold turkey. The logic behind this is that the high carbohydrate content of kibble slows digestion, and therefore the raw will accumulate bacteria in their stomach and make them sick. The truth is that kibble may actually digest faster than raw and there’s no risk of feeding them together.
Then there’s the detox myth that it’s normal for dogs to vomit and have diarrhea, sometimes bloody, when switched to raw because their systems are detoxing from their old diet. There is nothing normal about bloody diarrhea, your dog should not get that from being switched properly, and it’s not something to just wait out. And if anyone tells you it’s normal just run away and don’t take their advice. Even if you’re talking to them in person, just turn around and literally run away from them.
What to do instead: Personally I liked the trial run of a good quality freeze-dried raw. While there’s no scientific proof, this is just anecdotal, it’s almost like the freeze-dried raw was raw but also not quite raw-raw (if that makes any sense at all) and so it allowed Suki’s gut to acclimate to it more easily. She had zero issues switching right over to freeze-dried then moving to frozen a month later, whereas previous attempts to switch right over to frozen raw had ended poorly for her.
Another option would be to transition to it the same way you would usually switch to new kibble: A little more raw, a little less kibble each time until your dog is on full raw. I suspect this way would have also worked for Suki.

3. Skip the tripe.
I think this is the other reason my previous attempts failed. I see it recommended all the time to feed green tripe at the start for the digestive enzymes and probiotics. The thing is, the digestive enzymes in tripe are for cows, not dogs, so it’s unlikely that they actually offer much digestive benefit. And most of the probiotics in a cow’s stomach die once they’re exposed to air and frozen. Tripe is also incredibly high in fat, so if your dog is sensitive to fat it’s not going to end well for them and could even lead to acute pancreatitis. So pretty much the exact opposite of the reason it’s recommended in the first place.
What to do instead: Some people feed it as a source of manganese, but providing manganese is met in other ways you could never feed any tripe at all and your dog wouldn’t suffer for it. Most dogs love tripe though and, provided your dog doesn’t need a low fat diet, there’s no reason not to feed it. Just maybe not right at the beginning. I introduced tripe in small quantities a few months into feeding raw.

4. Don’t go to the grocery store, buy a random chunk of meat, and feed it to your dog right away.
There’s a really good chance that meat will have bacteria on it. It might go fine, most dogs are pretty used to eating or licking nasty stuff outside, but if your dog isn’t the type to scarf down random rotten things on walks when you turn your back for a second then their immune systems aren’t going to be adjusted to handling the bacteria.
What to do instead: Better safe than sorry. Deep freeze meat thoroughly for a minimum of two weeks, or buy meat that is already frozen.

5. Hold back the whole eggs and whole bones.
This is totally anecdotal on my part again, so take it with a grain of salt and as the theory it is. I’ve heard of sharp bone fragments or sharp eggshells leading to emergency vet visits. Unfortunately no information is ever provided on what those dog’s everyday diets look like. I would be interested to know if they were kibble fed dogs given a neck or whole egg with shell as a treat, or dogs that were started on a whole prey model diet cold turkey. What I noticed when I first started feeding my dogs a whole food diet was that everything but the meat came out the other end pretty much undigested, and it took a while for things to look normal again. My best guess is that it takes a bit for the gut microbiome to adjust to breaking down whole foods. Bone is pretty hard to digest.
What to do instead: My approach to things is better safe than sorry, so stick to well ground foods at first. That way if your dog doesn’t digest them properly they can still safely pass through the digestive tract without causing obstructions of perforations. No need to rush things, there will be plenty of time to offer your dogs the “cool” stuff later. 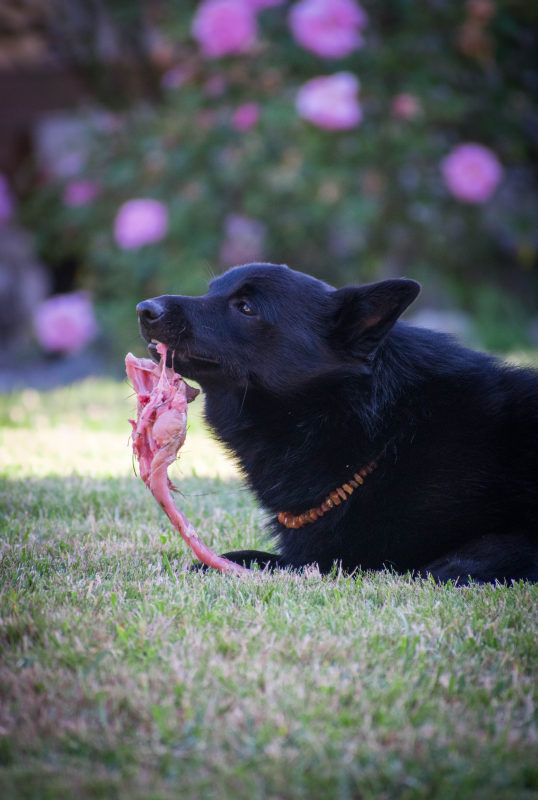 6. Don’t dive right into DIY.
Assuming DIY is even your end-goal, don’t dive right in trial by fire style because if you get it wrong it’ll be your dog that suffers for it (and possibly your wallet if your dog ends up needing veterinary care). There are also several nutrients (zinc and manganese being the main ones) that are missing in most DIY diets and ratio-based premades that can cause a lot of problems later.
What to do instead: Start with a good quality premade that has been balanced to aafco standards while you get the hang of DIY. Add some extra ingredients as toppers, feed some raw meaty bones as treats, try a few DIY meals alongside the premade, then shift to DIY once you’re set up and prepared for it. Formulating recipes is one of those things that seems way over complicated at first, but once you get the hang of it and start to learn which ingredients are good sources of each nutrient it’s pretty simple to whip up a recipe. Take your time getting used it. I dabbled in setting Cronometer up for my dogs for nearly a year, setting it aside if I started to get frustrated, before I actually started making meals.
Choosing an aafco balanced premade is important (check the back of the bag, it will say something like “formulated to meet or exceed aafco standards”). Many premades out there, even the ones labeled complete, aren’t. Here’s a “complete” premade food, along with everything I had to add to make it actually complete and balanced. This premade had almost no calcium or vitamin D in it before I added ground eggshell and fish, and would be dangerous to feed by itself long term.

7. Don’t feel pressured to feed a certain type of diet or to DIY everything.
Do a quick search of any raw feeding hashtag on Instagram and you’ll see a lot of bowls with things like whole baby chicks and animal heads. Like everything on Instagram, it seems like if you’re gonna post it you go big, or you just take yourself back home and sit down. You absolutely do not need to feed those things to your dog. In fact, you don’t need to feed anything but a complete pre-made if you don’t want to. Suki still eats mostly premade raw with a few add-ins because her gut is more sensitive than Roe’s.
What to do instead: Maybe just stay away from the raw feeding hashtags, at least at first. Get your bearings with a simple diet first, then if you want to you can start taking inspiration from the crazy bowls.