A lot of people seem to be under the misconception that Roe is here to eventually replace Suki. The thing is, you can’t replace dogs. You can add more dogs, but you can’t replace the individuals. So no, Roe isn’t a replacement.

I think a lot of that misconception might come from him being the same breed. Breeds are so much more than just a name and look. Dogs of the same breed will share a lot in common, but they’re not all carbon copies either. They’re this beautiful multifaceted creature that combines a core base of predictable traits with their own personality layered on top.

When we first added Roe I focused entirely on the differences between him and Suki. I didn’t want to fall into the trap of second dog syndrome, wherein the second dog is unable to live up to the expectations set by the first. It was only once he had completely enmeshed himself in our lives as his own unique self that I began to marvel at all the ways they’re the same. 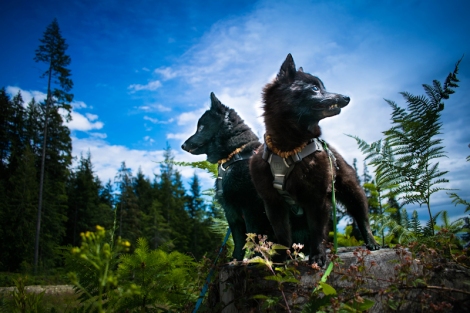 Suki is a stickler for the rules. If there is a dog capable of having a concept of right and wrong, it’s her. I don’t generally like to be anthropomorphic, but she wants to be a good dog. And when she establishes a rule she will make it her job to enforce it on others. Roe is a boundary pusher and rule breaker. I had to remove all the candles from my coffee table because Roe thought it was fun to jump up there and steal them. Whenever he would do this Suki would stand on the ground alternating between barking at him and barking at me. I think she forgets I once caught her on the kitchen table attempting to steal a pie.

Suki is soft. While she isn’t a pushover she prefers to avoid confrontation. If another dog is giving her the fixed stare she will try to slowly move away and avoid eye contact. She gets upset and needs to leave the room if people in a movie are fighting. Roe sees adversity as a challenge to be tackled head-on. 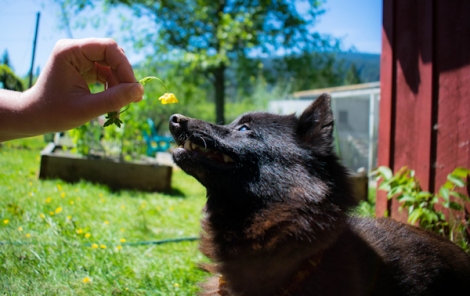 Suki was the best first dog for me. Just enough drive and intensity to cultivate my interest in training, but biddable and forgiving enough to allow me to make mistakes. So many mistakes. Sometimes I think she could have gone so much further with a more experienced owner, but I’d like to think she ended up where she was meant to be. Her softness made me look into positive training methods, because the force-based training that was popular at the time made her shut down. We walked out of a force training class and I’ve never looked back. I’ve had to learn to stand up for her, and she paved the way for me to do better with Roe. Roe is, I think, a little drivier. A little more intense. A little more resilient. Had he come first I may have embraced e-collars instead of clickers. I’m so excited to see where we can go.

Suki doesn’t know a stranger. She greets all people with the calm, dignified reserve of a dog that is neither fearful nor over-aroused. She will happily let strangers hold her on her back like a baby. Roe is a little more reserved, more suspicious of strangers, and prefers them as a distance. He adores people he knows though and wants to climb all over them, lick their ears, and is just generally so exited he cannot contain himself.

So many of his current traits could just be adolescence, or maybe they’re his personality. I’m excited to see how he matures and to let him become whatever dog he’s supposed to be. No expectations, just opportunities.

While Suki and Roe have a lot of differences, they also have a lot of similarities. They’re opinionated, headstrong yet biddable, and wicked smart. And when I really think about it, Suki was cheekier in her youth. They’re not the kind of dog you own, they’re the kind of dog that knows they’re your equal. They work best if you earn their respect and work with them.

And they love to dig. Don’t get a Schipperke if you can’t handle that, because it’s one of their greatest joys. 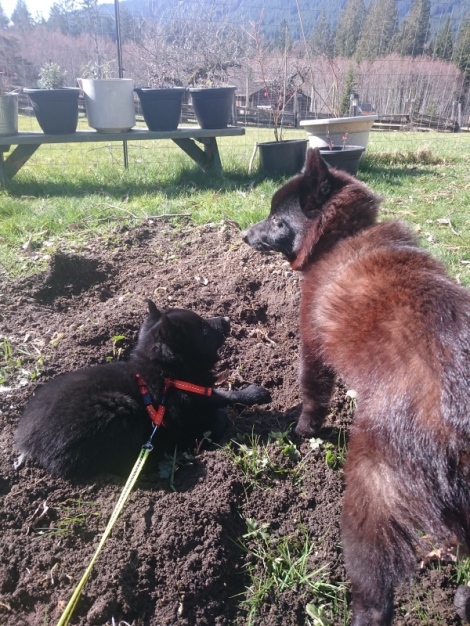 Adding Roe hasn’t been all sunshine and rainbows. As is common when adding a puppy with an older dog, he and Suki didn’t immediately hit it off. I think it was compounded by her developing resistance to her Addison’s medication, so she felt really, really awful and very much not up to dealing with a puppy. We’ve had moments where we felt pretty guilty for changing her life so drastically. But during his first week here they had formed a truce just long enough to destroy any semblance of order my tomato garden project had, and I just sat down to watch them work together. Roe, tired (for 2.8 seconds) laid down beside me. And as she often does when I sit down Suki quickly came over to join me, sitting with her back against my leg so she could enjoy a scratch while keeping an eye on the world around us. And it was at that moment, as I scratched each of my dogs, that I felt the absolute contentment with my decision. On my right, Suki. Perfect in the way that only an eleven year old dog can be. On my left, Roe. Brimming with the unknown potential that only a 9 week old puppy can have. Two sides of a coin, not competing but complementary.

One response to “On Adding a Second Dog”

He's not a big fan of the waterfall noises. #schipperke #soschipperke #lifeofaschipperke #schipperkesofinstagram
I've been trying to focus on what I have, but I'd be lying if I said I wasn't disappointed. I've wanted to do herding for a very long time. Suki got her HIC, but due to various circumstances we never got to try lessons or take it any further. When this all started I was in the process of setting up a way to herd with Roe, even just once a month (the challenge of living in a landlocked area). But it's on the backburner again. I know Roe doesn't care. He's happy as long as he's doing something, whether that's a sport or hiking or just solving puzzles at home. But I wanted it, and as much as I try to squash the feeling down there's a level of disappointment at postponing it again. It's hard not to feel like it's never going to happen, that it'll stay on the wishlist until Roe is too old to herd too. But maybe it's good to give voice to our disappointment. Then pick up, look for something good, and move forward. What are you doing for training and enrichment right now? I realized I've completely forgotten how to do sit at home training. And it shows, considering Roe has like zero obedience at home but is an all-star out hiking where I did a ton of training lol. I have so many puzzles and enrichment things from Suki, including two books on advanced brain games. So I think I'll focus on working our way through the books. #schipperke #soschipperke #lifeofaschipperke #schipperkesofinstagram
Boop! #schipperke #soschipperke #lifeofaschipperke #schipperkesofinstagram
%d bloggers like this: