The Surprise at the Top of Mount Doug

On my birthday we hiked Mount Douglas, although it seems like most locals refer to it as Mount Doug. It’s a bit like a bigger version of our Soames Hill: Not particularly long, but the view at the top is fantastic. 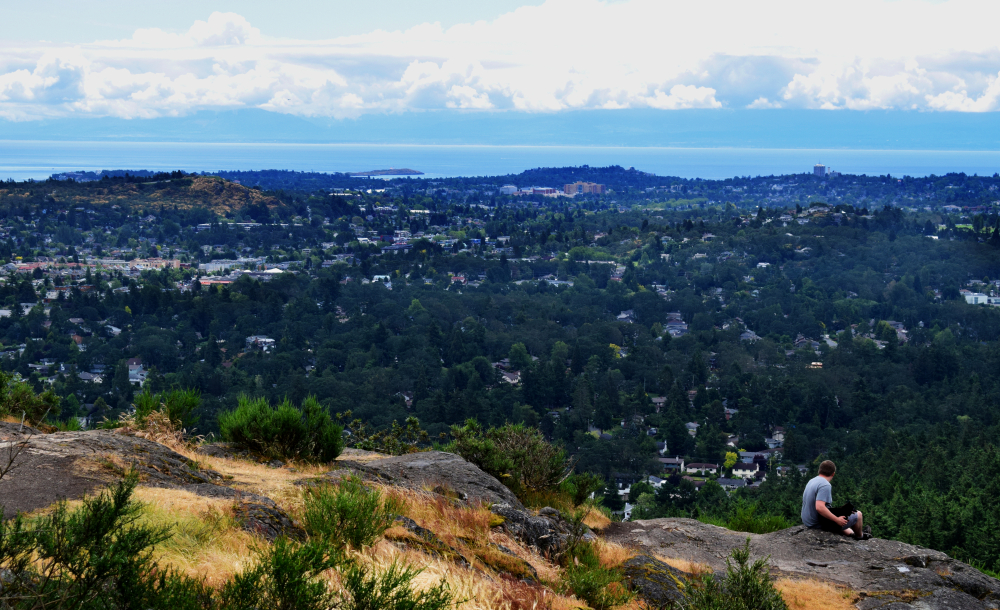 That isn’t the surprise though.

The trail starts out like a nice nature walk. The trails here are actually off-leash (although it’s still important to follow my rules for off-leash etiquette to make sure you don’t become a doggie douchebag). It seems like most of the trails around Victoria are off-leash unless otherwise specified, but I didn’t look too much into it so don’t quote me on that. 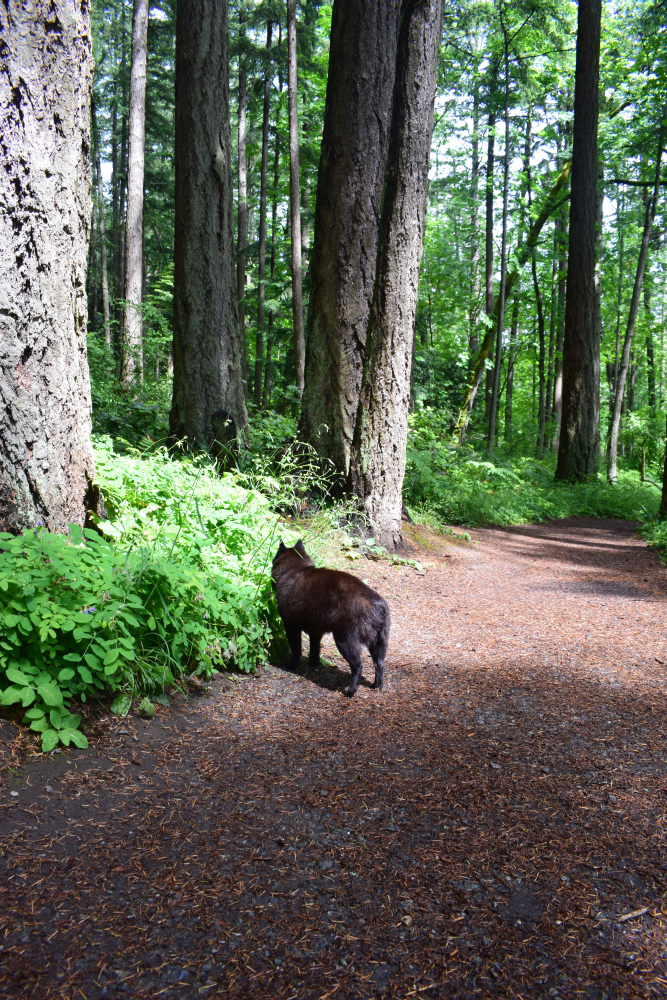 There are so many birds here, and if you’re lucky you might even snag a halfway decent shot of a hummingbird. 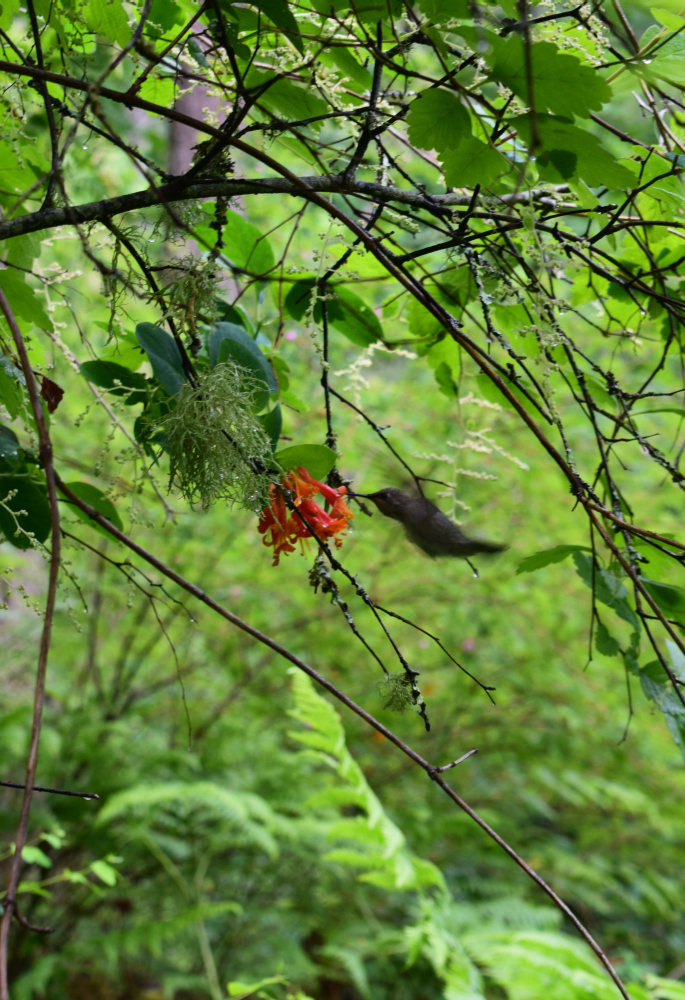 Along the lower area there was a lot of dog crap. This is where I stepped in the massive pile that I mentioned before. The hike it worth it though, just watch out for that. also that isn’t the surprise either. It was definitely a surprise, but it’s not the surprise.

If you don’t feel like hiking a lot of hills you can actually just meander along the bottom of the mountain through a huge network of nature trails. It’s gorgeous here. Had we spent more time on The Island we would have definitely come back for the lower trails, but because we only had four days and lots to do we went straight for the summit. If you opt to do that the trail quickly starts sloping upwards, and if you’ve been indulging in vacation and/or birthday food you’ll start to question your sanity for deciding to do this. 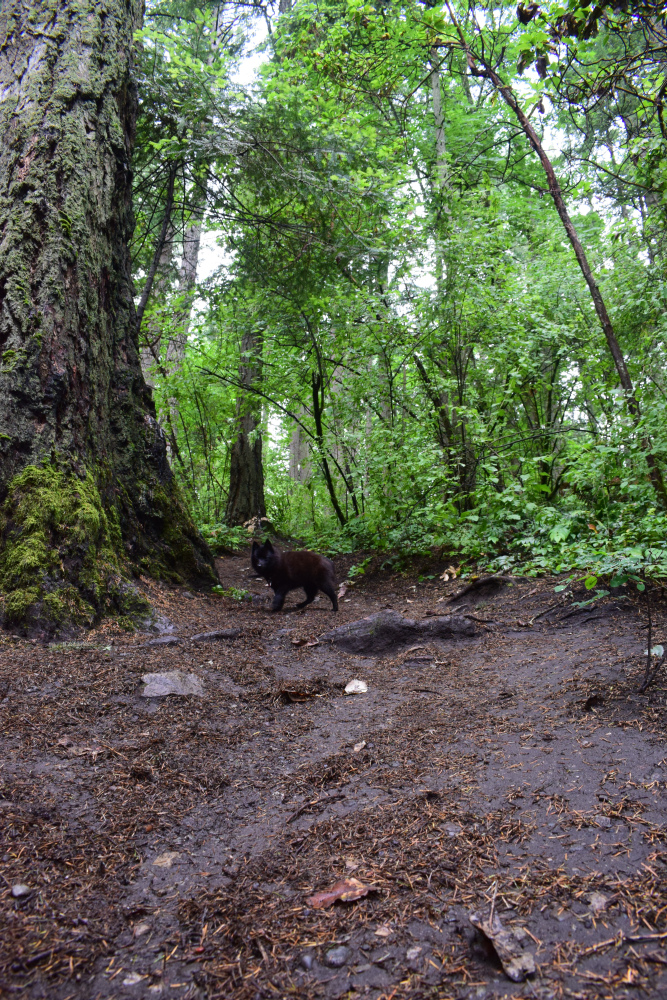 Keep pushing on though, because like I said the trail isn’t overly long. Maybe 20-30 minutes to the top. It quickly starts to even out into a… Grassy meadow type area? I’m not really sure what to call it, but it’s pretty. 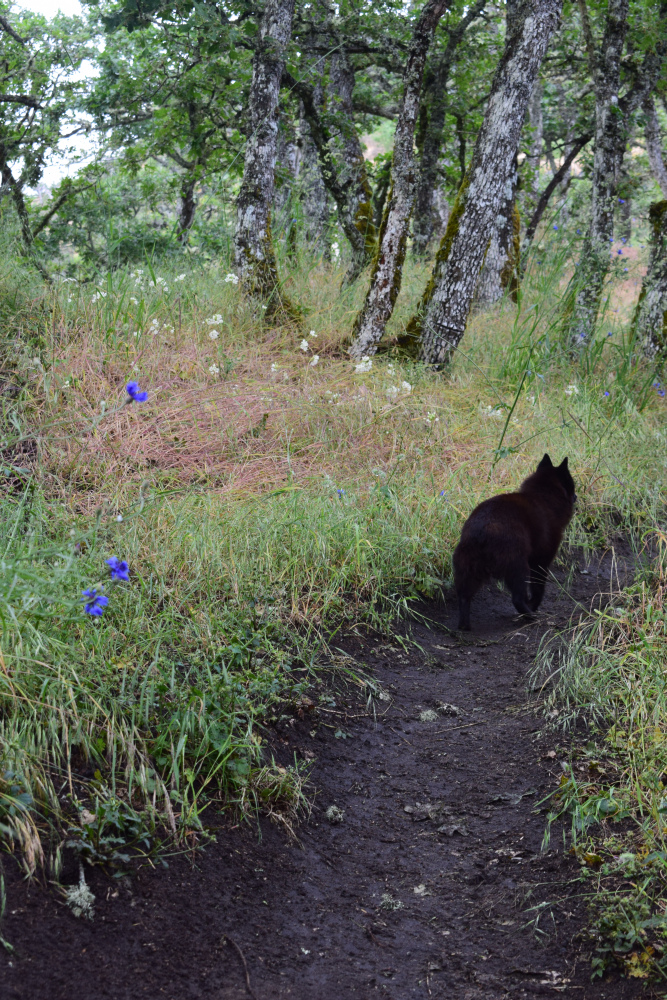 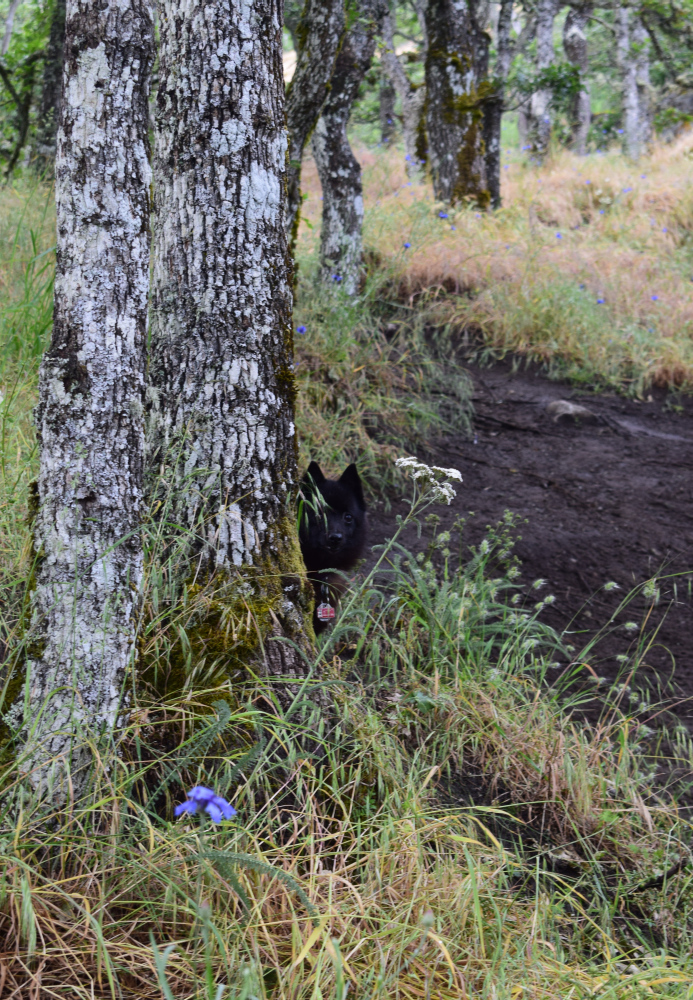 It’s right around here that you’ll catch your first real view of Victoria. 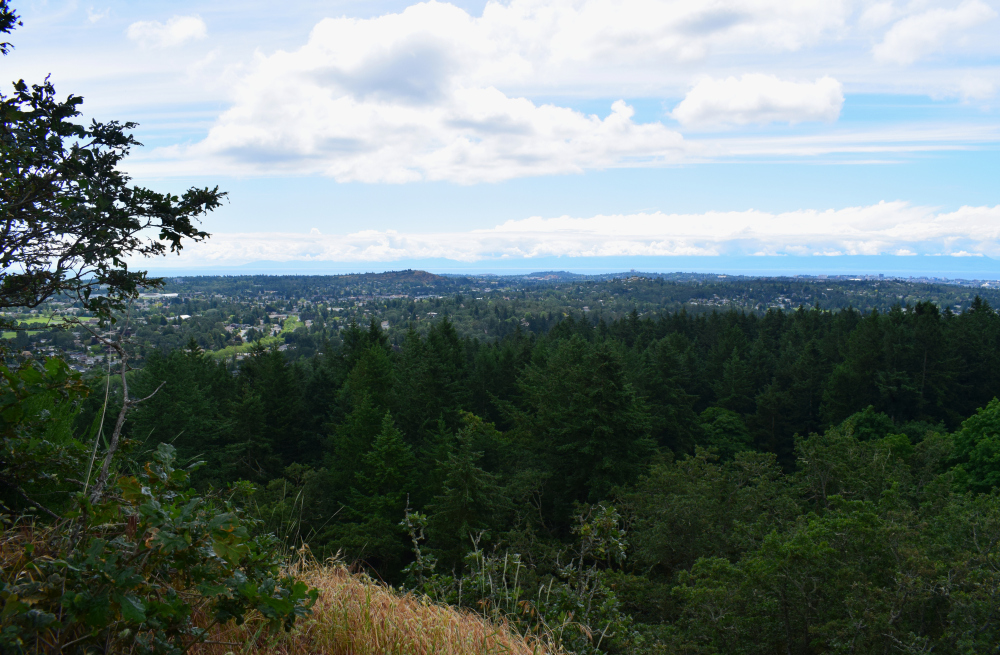 And also where the rocks start. 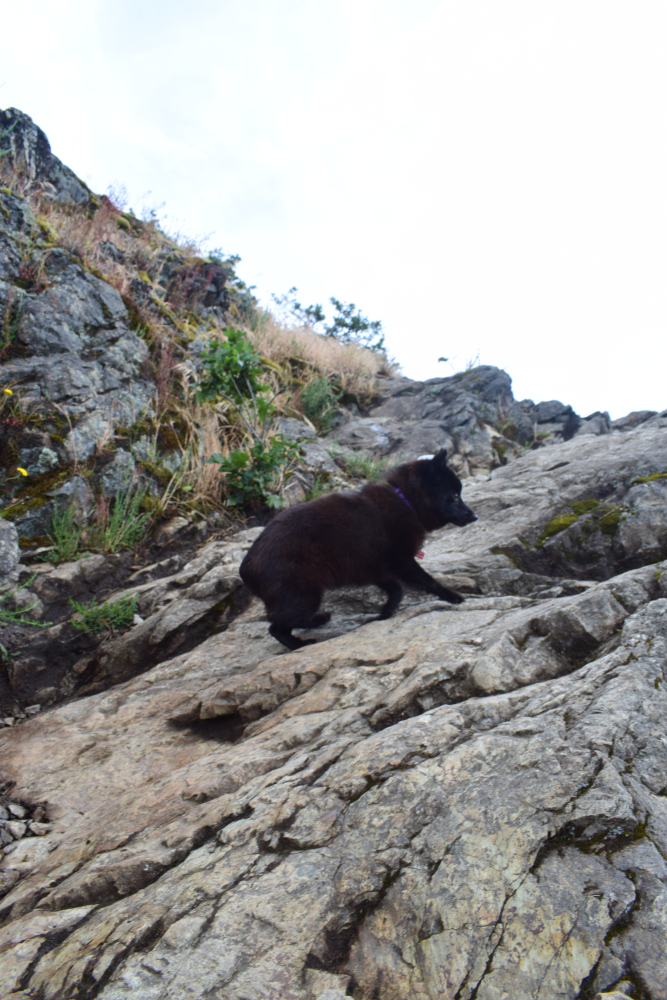 I mean, I like rocky scrambles and Suki just loves them, so I don’t mean “that’s where the rocks start” in a bad way. But if you personally hate rocks just know they’re there. They’re worth it though. 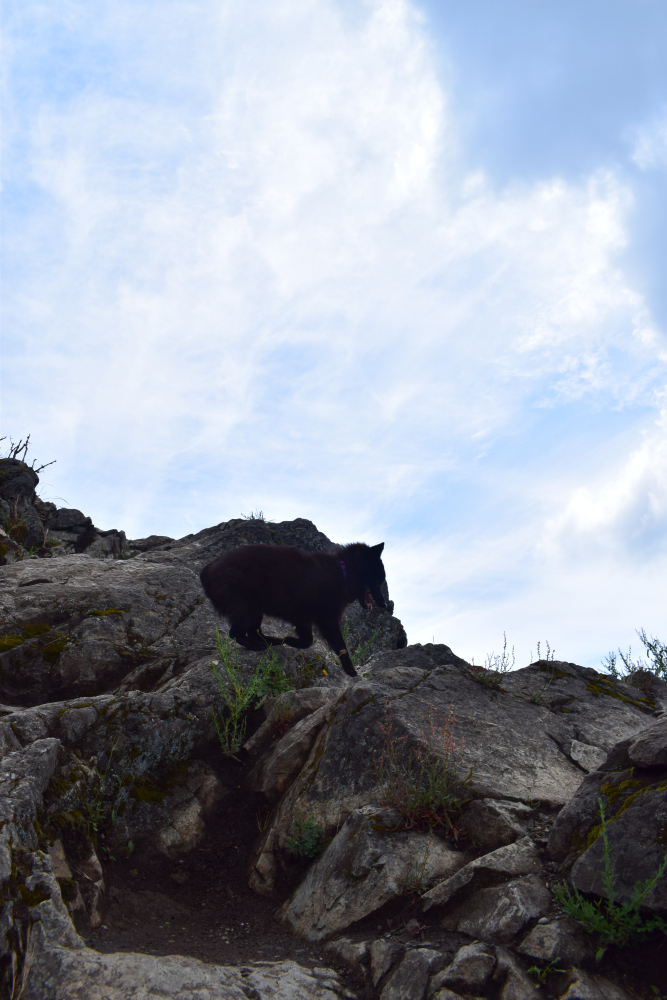 Like I said, Suki loves rocks. It doesn’t matter if she’s getting a bit tired, the moment she spots rocks she’s raring to go again and leads the charge.

There’s a lot of fantastic stuff along the way if you stop to look down. Looking down sometimes is also useful for avoiding tripping, like I almost did. Tripping can lead to things like rolling back down the mountain, which is a great way to put a damper on an otherwise nice trip. 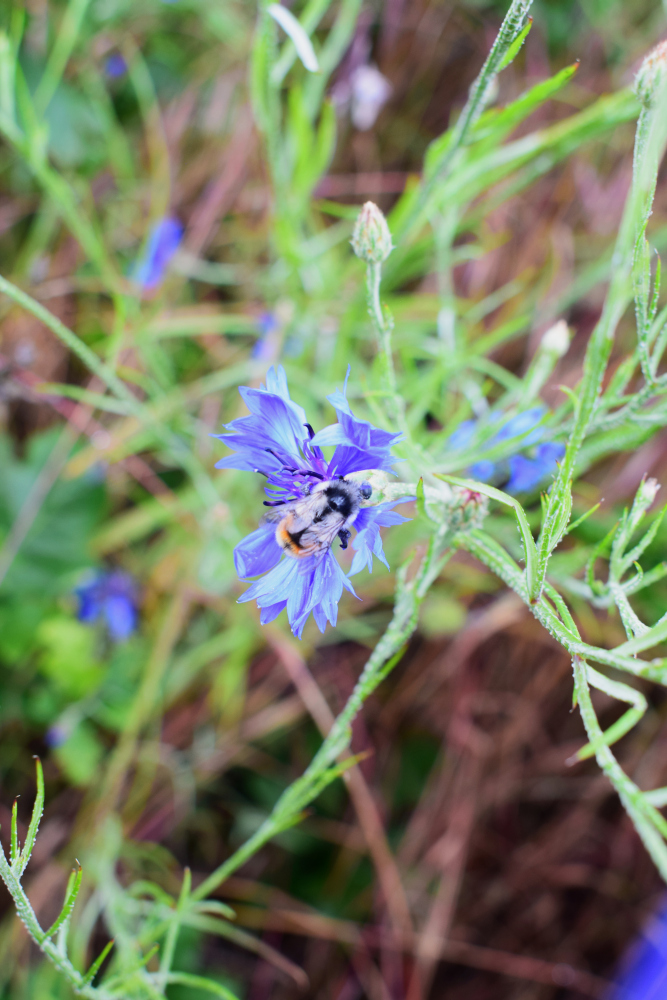 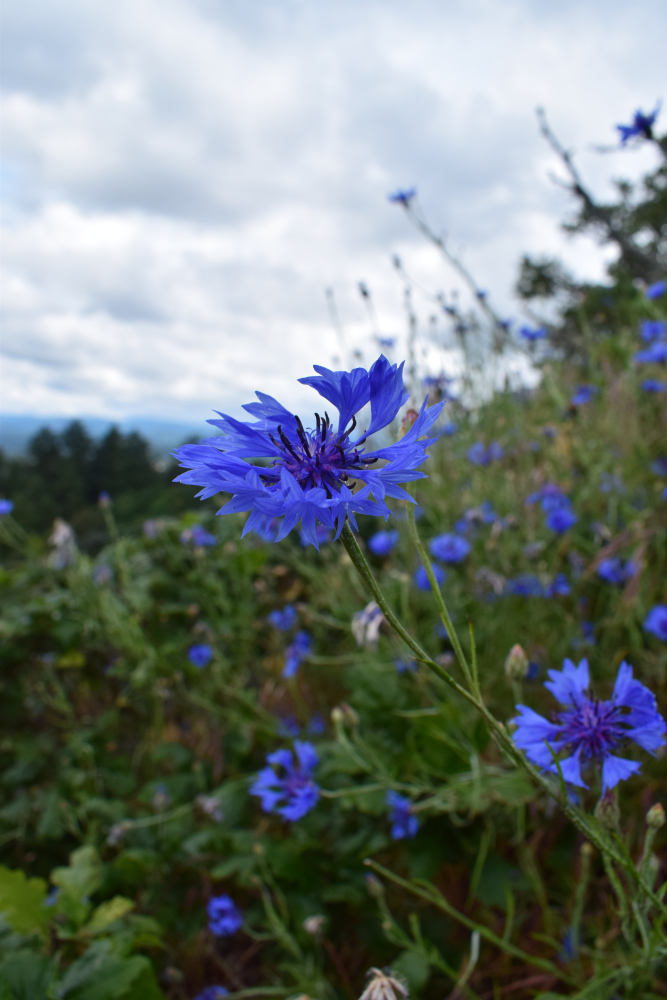 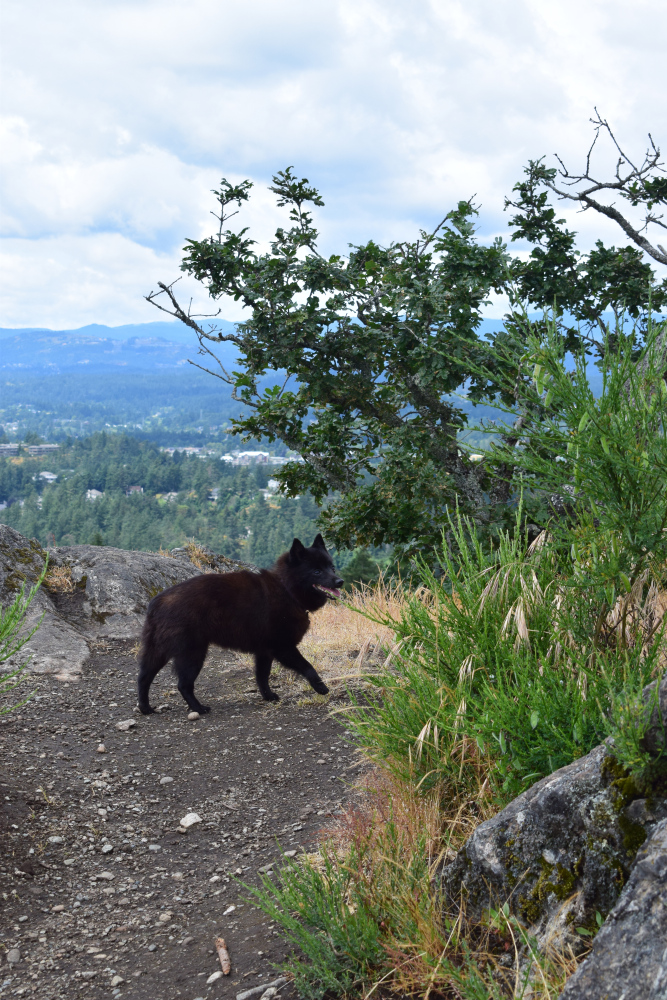 Here’s where the surprise comes in. Considering we had only run into two other people on the way up, we were really surprised by how many people were at the top.

Then we noticed the parking lot. 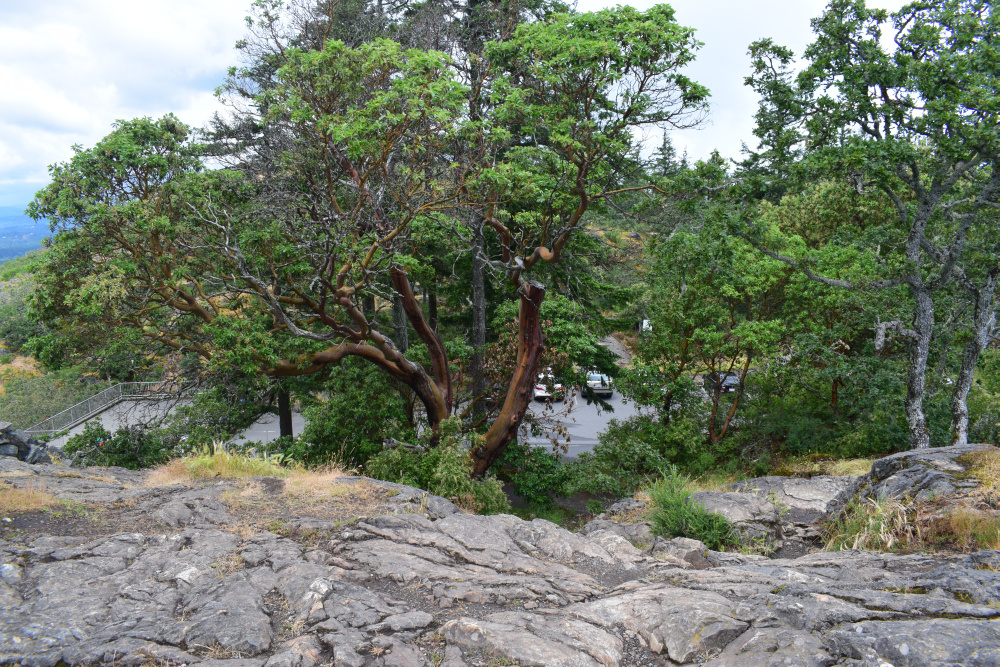 Yep, there’s a road all the way to the top. That we didn’t find out about until we had walked it. Honestly though we just found it hilarious. We would have walked anyway, and I’m not one of those people that gets sanctimonious about these sort of things. In fact I think it’s great that this viewpoint is accessible to everyone. The rocky areas are obviously not wheelchair accessible, but there’s a nice paved deck-like area with a view.

We leashed Suki to cross to the other side where most of the people were. Even though it’s a bit crowded it’s worth checking out for the map of the surrounding area. 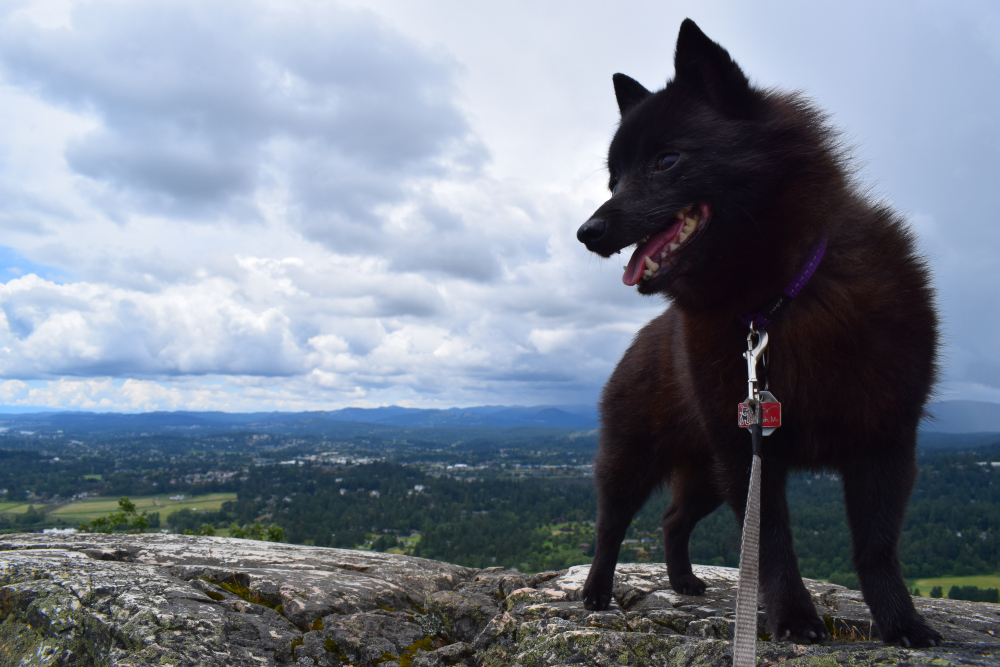 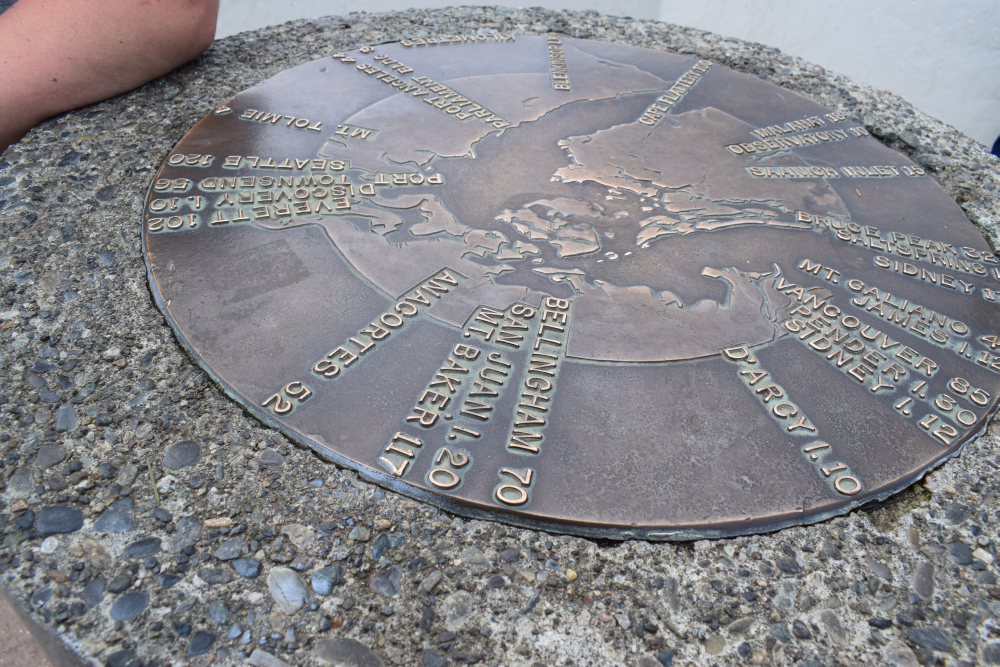 I think this is the direction the Sunshine Coast is, but to be honest I’m not exactly sure. 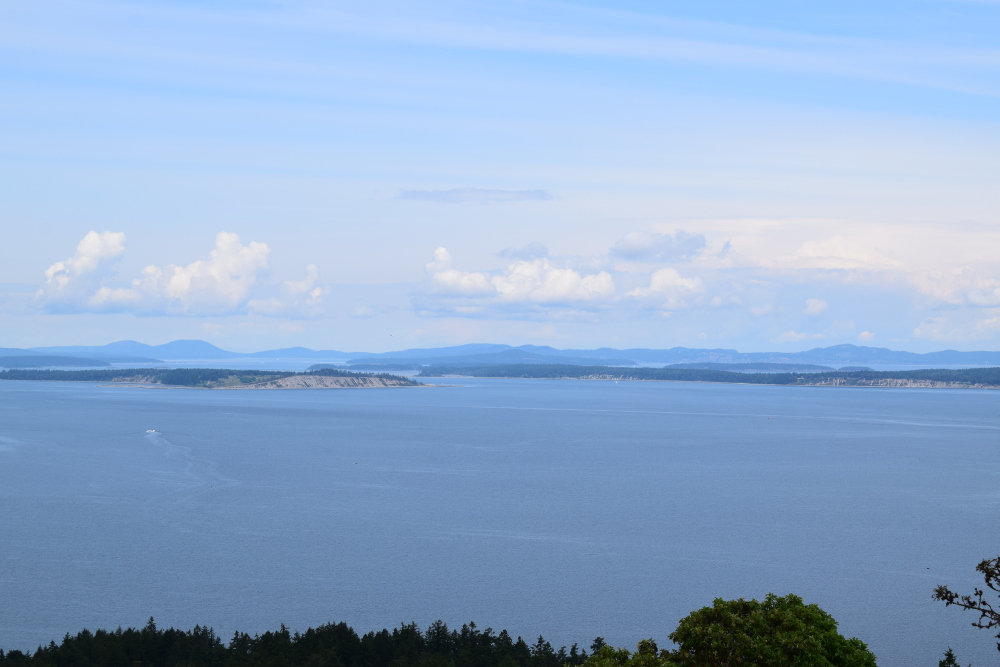 It was starting to get hot out, and we were all getting pretty hungry, so we decided to walk back to the car via the road. It’s well shaded by the giant arbutus trees (I seriously cannot get over the size of the arbutuses here). 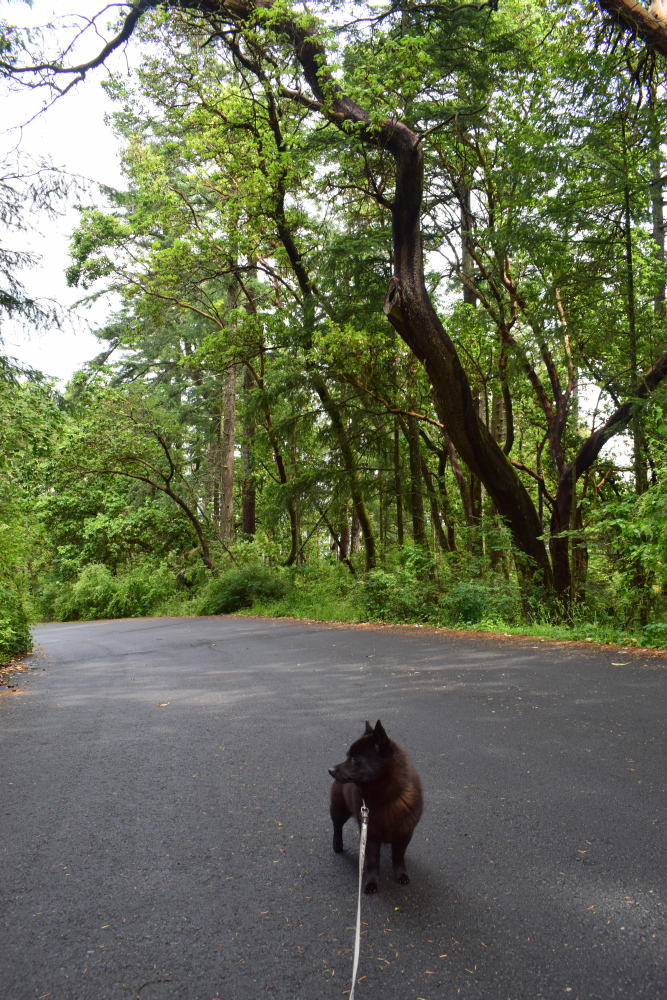 I would definitely hike it again. 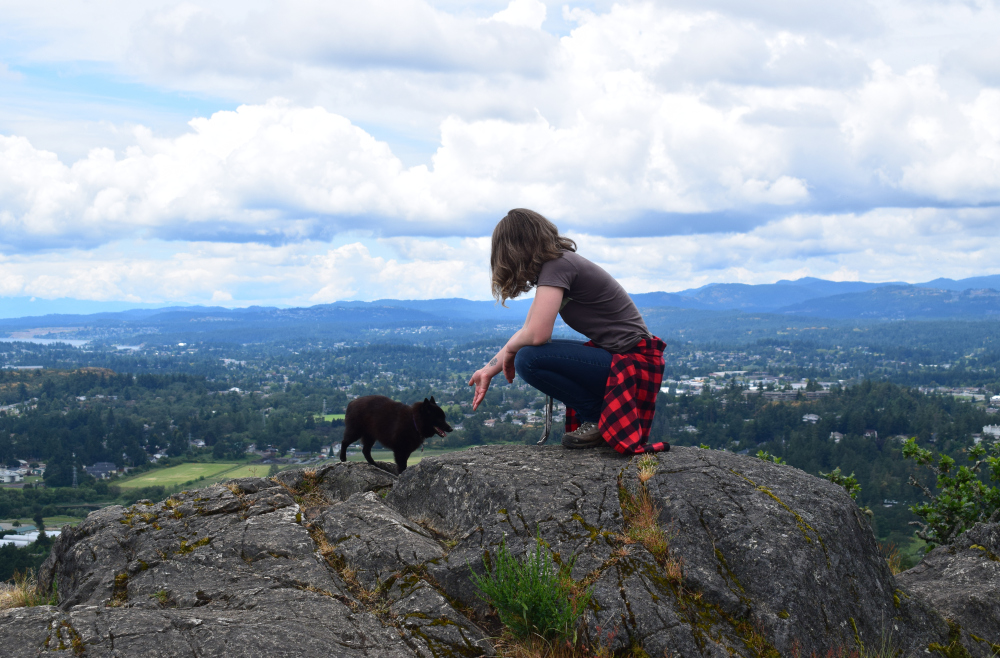