On Canada Day we decided to try out a new trail with a sign that said 3.33 km, but after we were finished my tracker said it was 8.97 km. 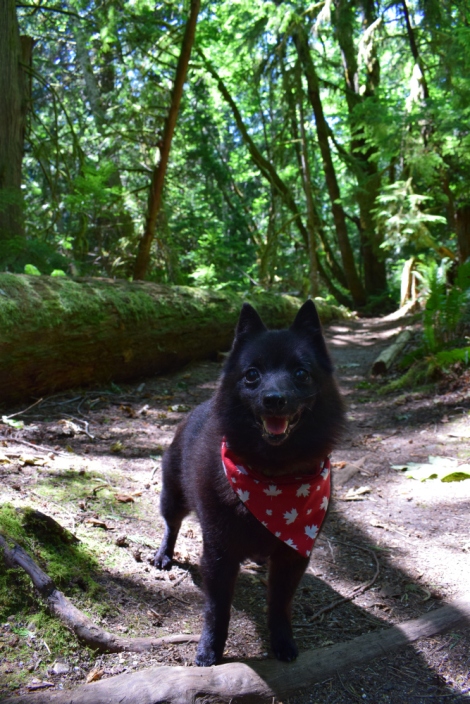 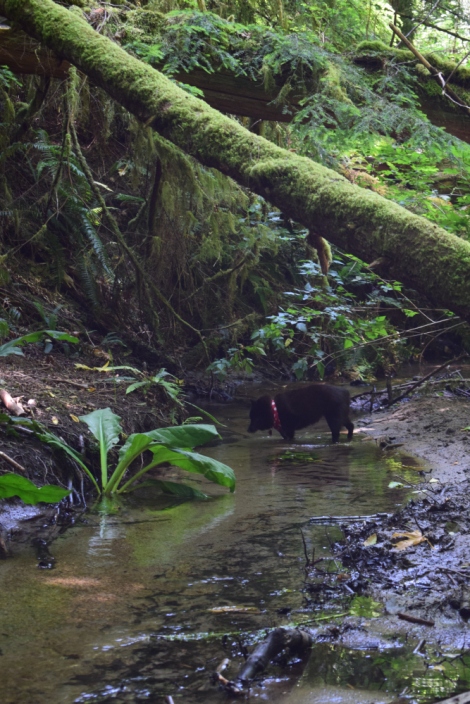 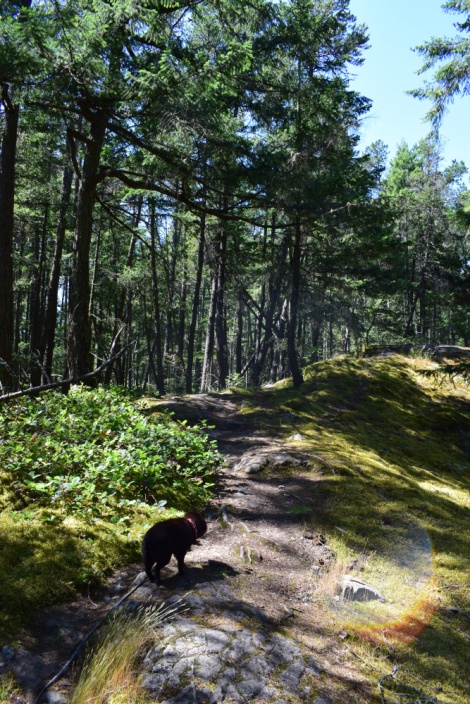 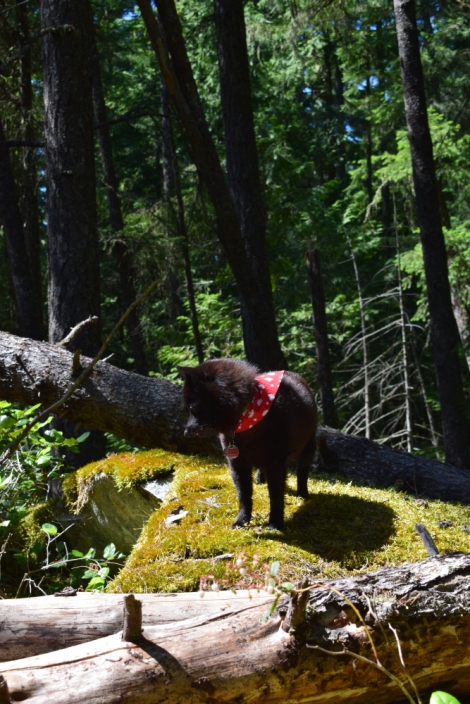 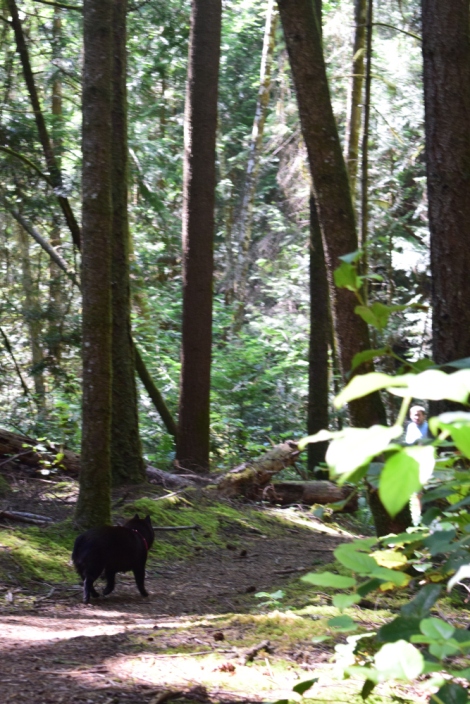 Sorry for the creepy-crawlies, but these are just too cool not to share. 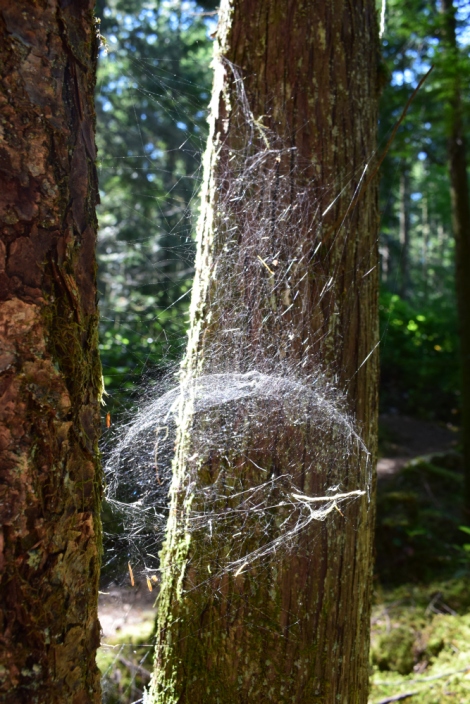 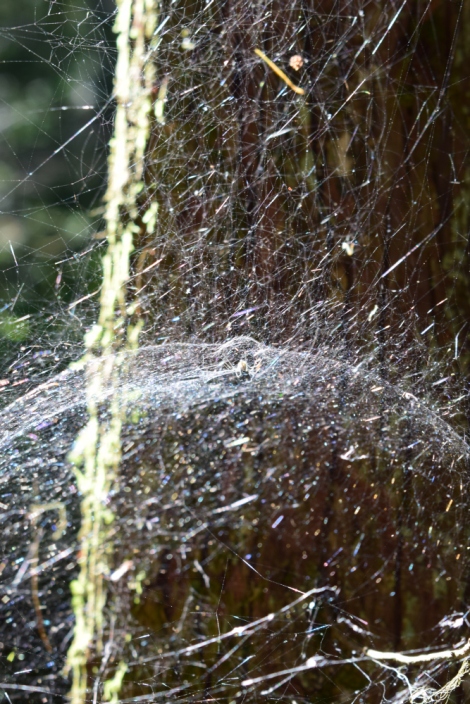 No matter how many nice photos I take of Suki, the outtakes will always be some of my favourites.

I was surprised to find this robin egg half. It was pretty fragile so I’m guessing the robin hatched a while ago.

Also Suki is apparently a racoon. She must have seen something in the water because she kept doing the paw swipe thing, trying to pull it toward her. Complete with little toe flexing grabby-paws. You can kind of see her toes in the third picture. I don’t know what she was curious about, but it’s so cute I can’t even-. 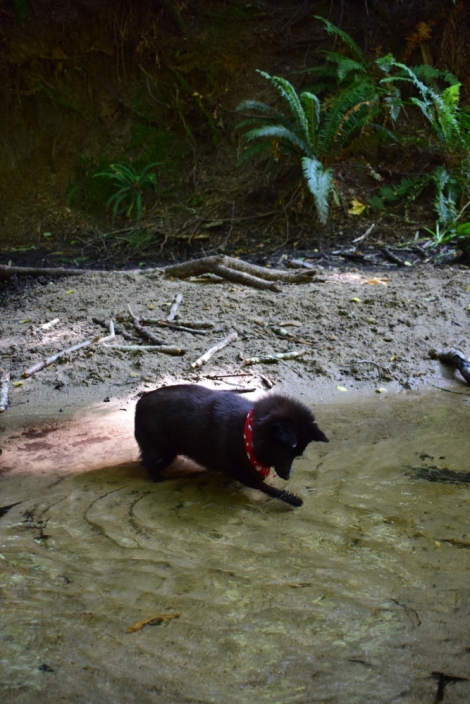 And of course the best way to dry off after going in the river is to rub your face all over dirty moss and fern. 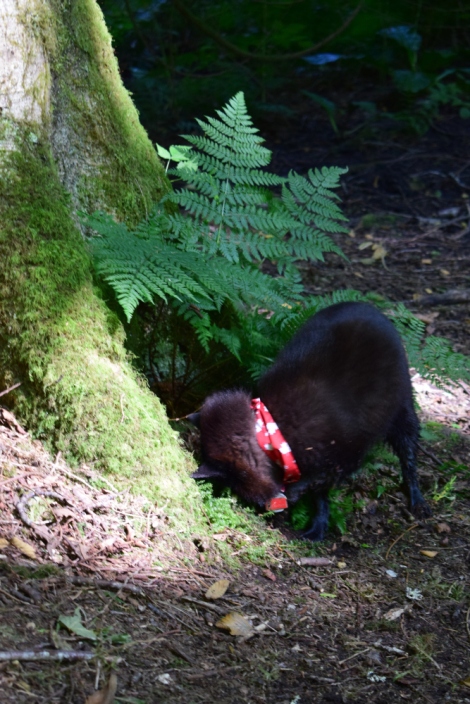 We harvested the first bounty from the garden! Most of it went into a batch of dog food (is anyone honestly even surprised?), but some of the radishes were quick pickled for bahn mi. I’m letting some of the remaining chard get really big so I can use them for veggie wraps.

We’ve managed to do several hikes, most of which involved a river. 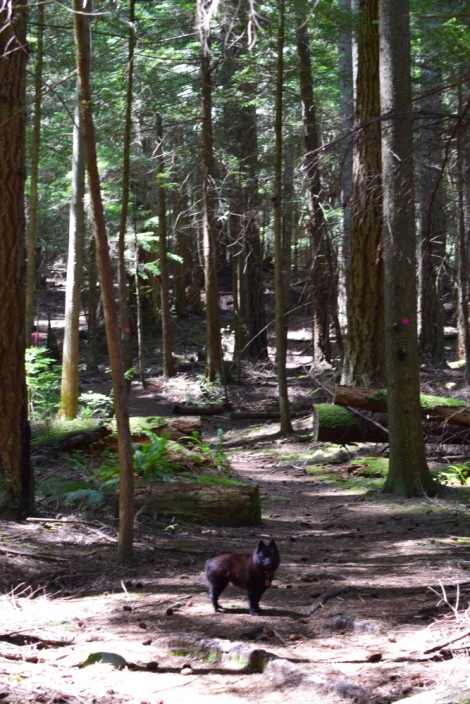 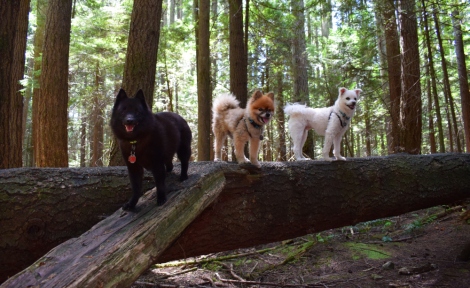 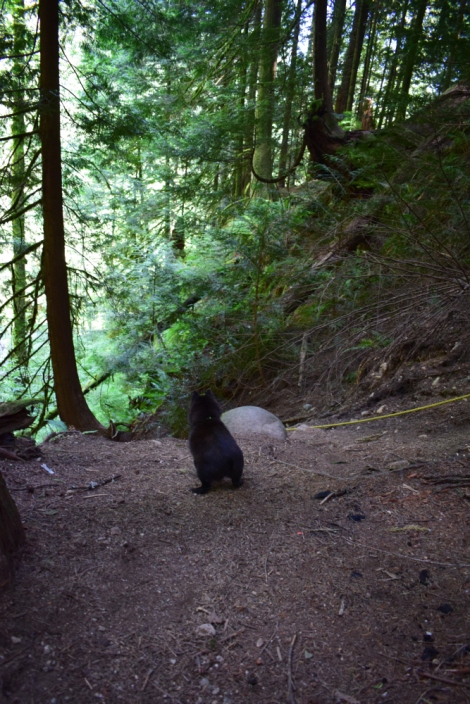 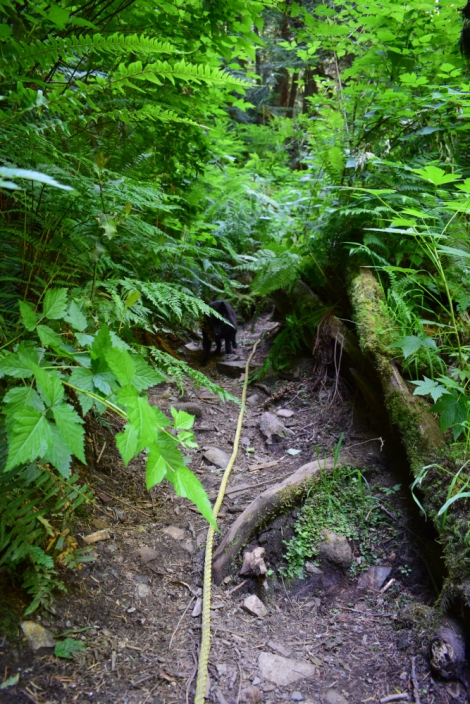 Why?! Why did these have to turn out blurry?!

Leave it to Suki to find, and have to investigate, every hole in the ground. I think this one was from a tree tearing out of the slope. 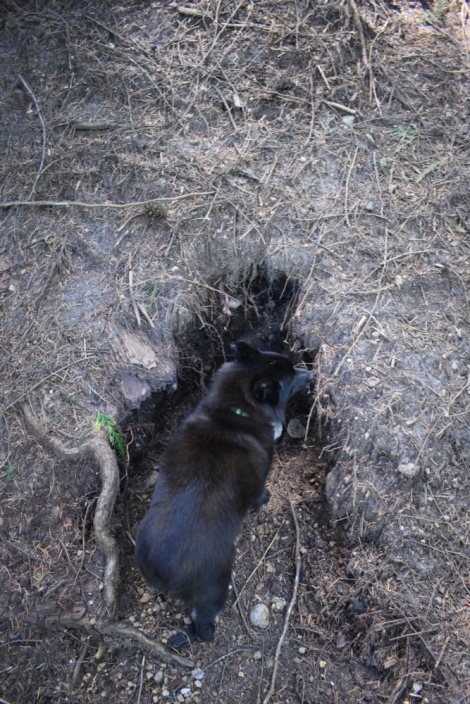 It was a pretty fun week. 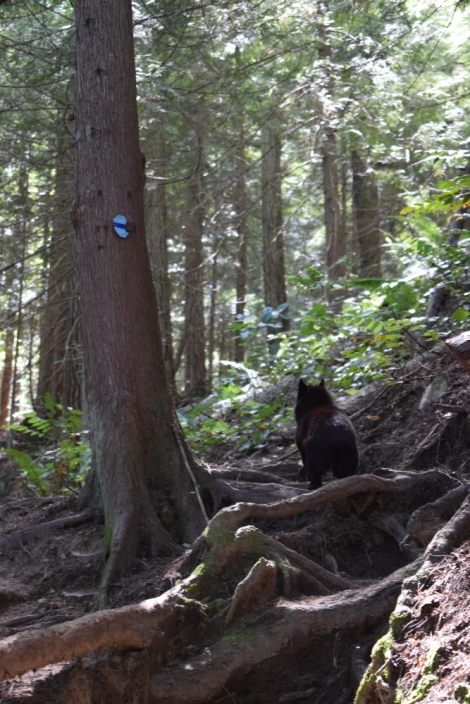 Ah douglas squirrels. Tiny psychotic little buggers. Did you know they eat hallucinogenic amanita mushrooms? It explains a lot of their behaviour. 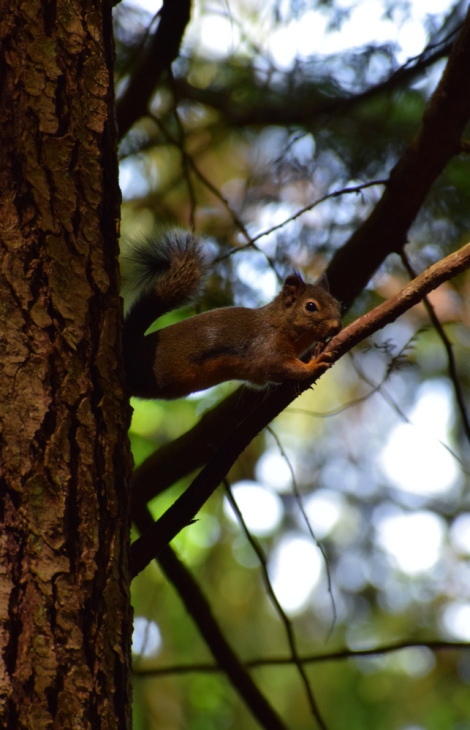 I also harvested one of my lavender plants. I agonized over it for a while, because I love lavender blooms but I also love lavender baking, and I decided to go for it because that is technically why I chose a culinary lavender breed.

Suki, as usual, supervised. This photo is kind of out of focus, but I also like it. 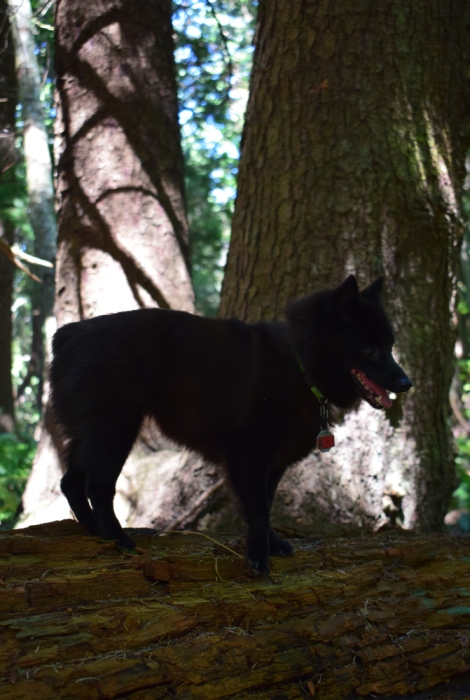 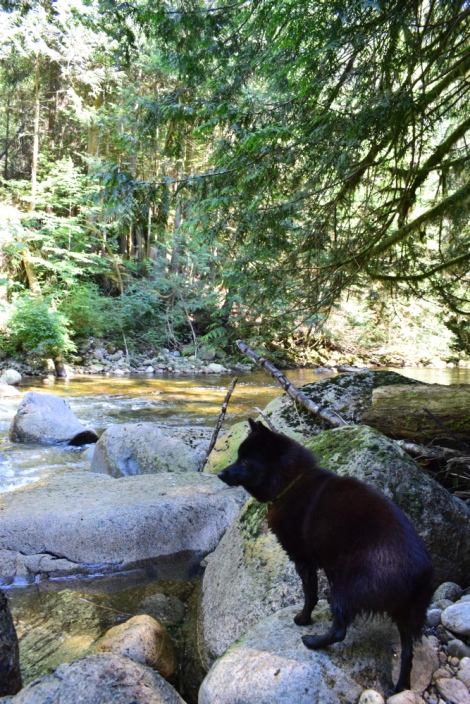 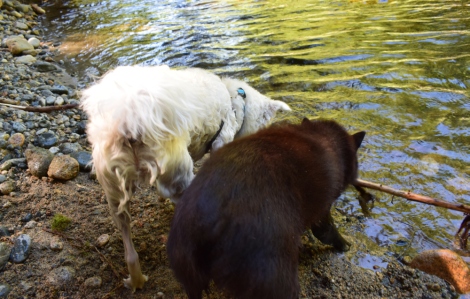 How cool is this tree? I’m pretty sure it grew on top of a huge stump, then the stump rotted away.

There’s also a few logs with faces carved into them.

I was surprised Suki decided to actually swim a bit.

This is more her style.

She’s not a swimmer. I can’t judge, because I don’t really like swimming either.

Anyone who has weeded a garden will appreciate the picture of this dandelion. I’m getting pretty good at pulling up the entire taproot, although it helps a lot that the soil in my garden beds is really loose.

I was just talking about how it’s been a while since Suki has jumped into one of the garden beds, then she did this while I was taking a picture of her standing nicely.

Suki and I have been spending a lot of time just hanging out around the vegetables. 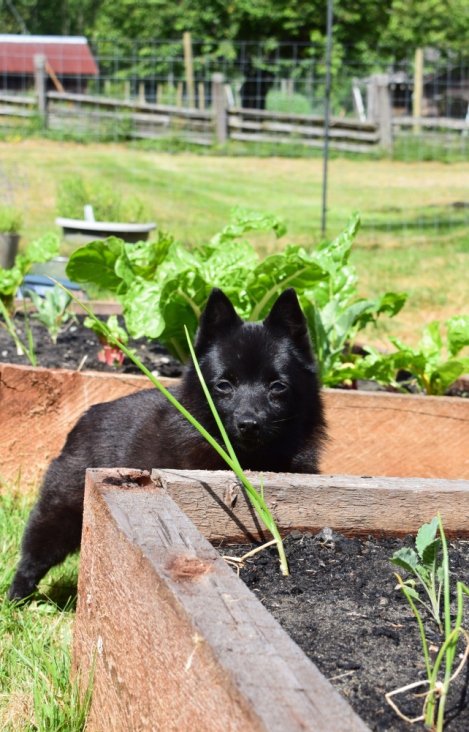 My dwarf blauwschokkers peas seem to be thriving. I was really late getting them in, but they’ve grown and I noticed the beginnings of flowers starting to appear. I have a nasturtium in with them but it seems stunted. 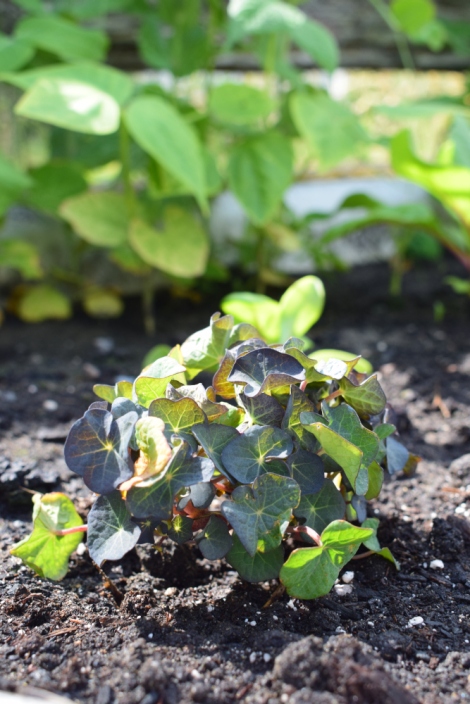 A tiny kale and brussels sprout.

My tomato bed seems to be doing pretty well. Even the basil is doing surprisingly okay, considering slugs devoured every leaf the first night I put them outside. I’m testing a slug barrier that I will share here if it proves effective. 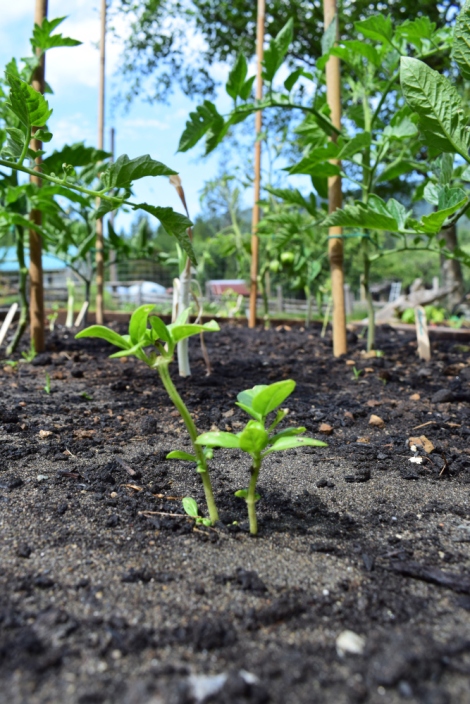 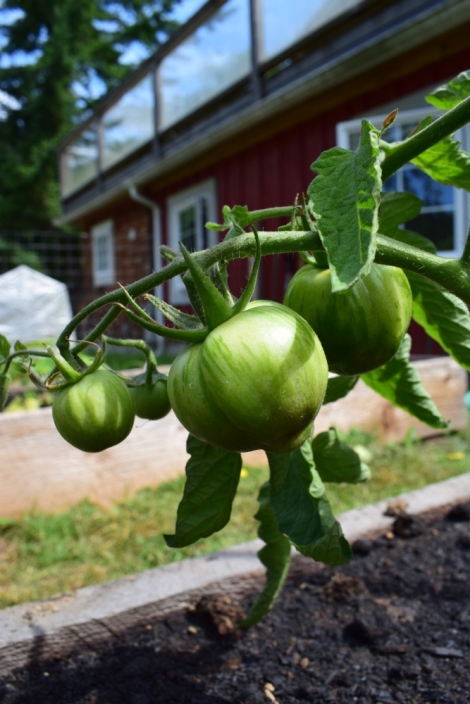 And the chard forest. They’ve been munched on by slugs but they seem completely unfazed by it. 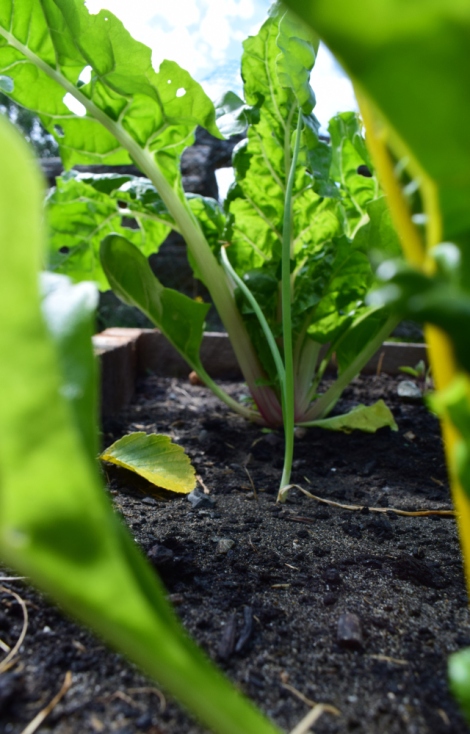