For my birthday Jordon surprised me with a trip to Vancouver Island, mostly around Victoria. I had fun in Victoria, don’t get me wrong. We hiked this really fantastic little mountain in the middle of the city, ate at a food truck, stayed at a great B&B, sampled a dozen different flavours of artisanal mini cupcakes, and spent our mornings leisurely brewing and sipping French pressed coffee. But by the last day there I had developed a cough, and the first morning home I woke up with a very painful throat and horrible congestion. I guess I’m just too much of a rural hermit to have the immunity needed to stay healthy in a city. Hashtag worth it though?

We went full tourist and walked downtown, camera hanging over my shoulder to take photos of random things. We stopped at the Parliament building. Then to complete the tourist stereotype we ended our trip with the Butchart Gardens. I feel no shame.

We of course took Suki with us. If I can’t take her, it’s not worth going. I think she had a love-hate relationship with Victoria. She loved all the smells, especially at the Butchart Gardens, but even though she loves people I don’t think she liked the crowds. It’s not so much the people per se, and had it been acceptable to let her off leash I think she’d have been perfectly happy weaving in and out of the people in her own direction, but she’s very sensitive to leash pressure so even very gently pulling her out of the way of oncoming people upsets her if it happens more than a few times. She’s what you’d call “handler soft” and if she even thinks she’s being corrected or if she doesn’t understand what I want she will slow to a dejected, plodding walk behind me. She’s also very biddable though so normally I can easily direct her using word cues and hand motions, but people in cities move fast and walking down the sidewalk is like playing a game of chicken. We started to just carry her whenever the crowds got really thick. It made me wonder if we should buy a dog stroller because then we could also use it to carry all our stuff. It also really drove home the thought that I need to make a habit of bringing my bait bag along on walks and practicing tight, fast heelwork around people. But back to the trip.

The architecture at the parliament building was a perfect match for Suki, and I think she knew it. 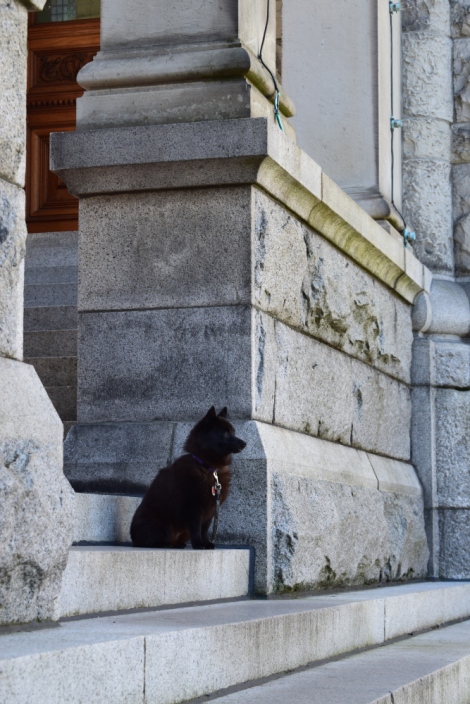 We had what I’m pretty sure was a dark eyed junco nesting just outside our front door. Halfway through our stay we discovered she had chicks in the nest. These little birds were all throughout Victoria and they were hilarious. They didn’t care much about people but they hated Suki and would follow her around, giving her the side-eye and yelling at her. The one nesting outside the door even yelled at her through the glass. Which really only served the purpose of piquing Suki’s attention, who until then hadn’t really cared much about the bird. 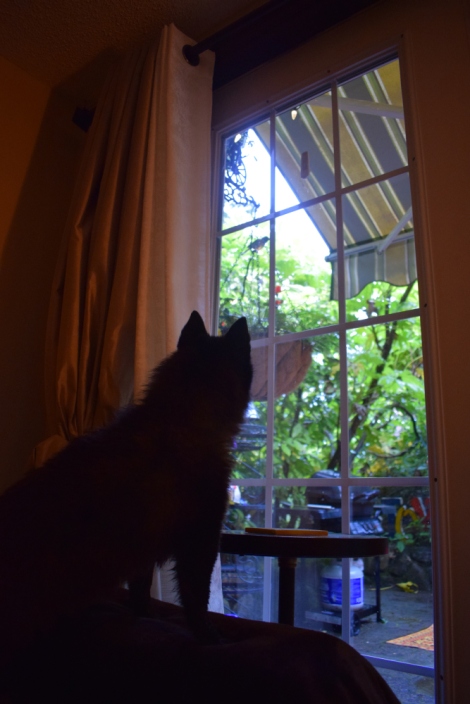 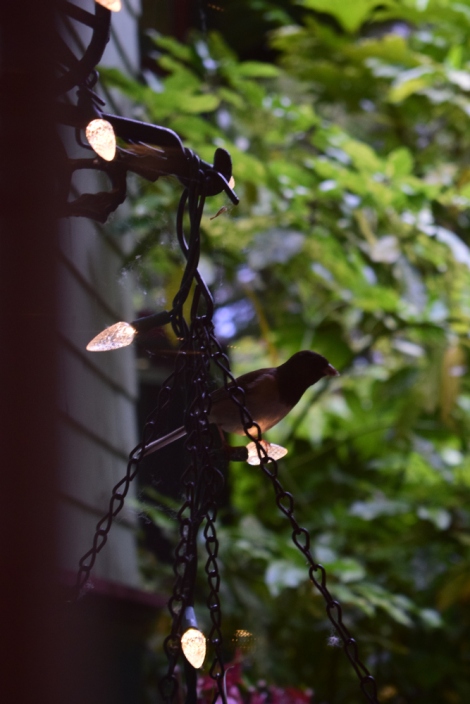 I only encountered one rude tourist who hit me in the head with her bag while I was crouched down taking a photo. Afterward Jordon told me she definitely saw me and just didn’t care. When she hit me I promptly asserted my Canadian-ness by apologizing and moving over. Ha, I sure told her!

We drove out to Sooke to check out the potholes hike. Sooke is disappointingly pronounced soo-k and not soo-key. I still took a photo of Suki with the sign anyway. 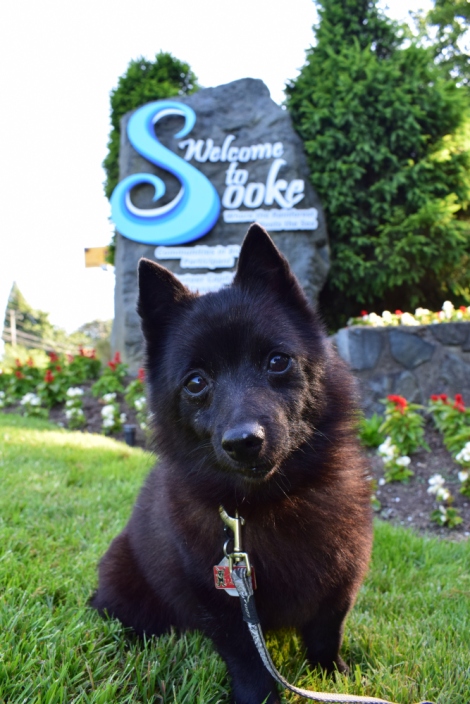 One of the things I found interesting was the number of people that said Suki looks like a little wolf. Wolves must be getting more popular, because in Suki’s ten years she had only been described that way two or three times. Fox and little bear were always the go-to comparison for people. While she did get little bear a lot, fox was only used once or twice while probably more than ten people used wolf to describe her. I prefer The Shrunken Love Child of a Bear and Wolf myself, because I’ve always had a flair for the dramatic. No one seems to find it as funny as I do though. 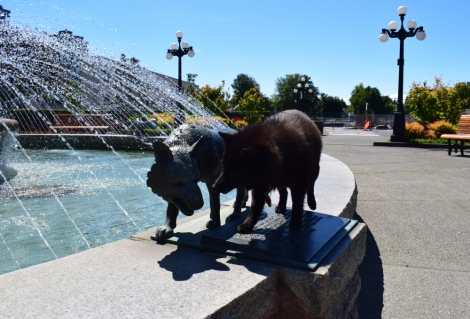 I’m also semi-excited to say we encountered our first stereotypical American. I thought that they had disappeared with the internet. She didn’t know what a Schipperke was, which isn’t unusual, but her first assumption was that the reason she didn’t know about them was because they must be a unique Canadian breed not found elsewhere. Then she said, “we have a goldendoodle… Er, do you guys have goldendoodles in Canada?”

Other firsts was my first time seeing one of those $70 rope leashes a certain company makes. I recognized it instantly because the only thing that distinguishes it from a rope leash handmade with $5 worth of stuff from a hardware store is the flimsy little brass brand tag hanging from the handle. I was probably too amused. Also maybe a bit jealous because it is a nice looking leash. Maybe I should make one.

It turns out people on The Island are not any better at cleaning up after their dogs than people on The Coast. While hiking Mount Doug I stepped in the biggest, smelliest pile I’ve ever had the misfortune of encountering. I laughed it off while singing happy birthday to me, but ugh seriously so gross. Like I’m pretty sure the dog that left it wasn’t actually a dog but some kind of cow-dog hybrid or something. Or a pony that had been fed too much sweet feed and molasses. And it was in the middle of the trail. Seriously people, at least grab a stick and play some poopy golf to get it into the bushes or something. On the whole though I think the average dog there was better trained, so there’s that.

I’ve said to three people that as much as I enjoyed Victoria and the surrounding area, I’m okay not moving there. Now that I’m back on the Sunshine Coast though I want to be back on Vancouver Island. Then I get a fit of hacking coughs and am pacified with my current location for a bit.

I have a lot of post ideas from this trip, but for now I need to sort through the 1000+ photos I took while chugging back Nin Jiom and maybe making some ultimate feel better soup.