Today is May 1, (Inter)National Purebred Dog Day, so I’ve switched up the Monday and Thursday posts. Monday’s usual photo post will still appear, but on Thursday instead. Last year I talked about choosing a breeder, but this year I’m waxing nostalgic so I’d like to just ramble about my experience walking a purebred dog, particularly a semi-rare breed.

An interesting thing happens when you step outside with your purebred dog. You are instantly part of a little social circle. People who don’t understand mistake it as being like an antiquated elite club, but that’s neither accurate nor fair. It’s more like something people can instantly recognize as a shared interest, something they have in common. Something that two strangers from completely different backgrounds can connect and talk over. I’ve had entire conversations with people over the years that I never would have even spoken to had it not been for Suki. 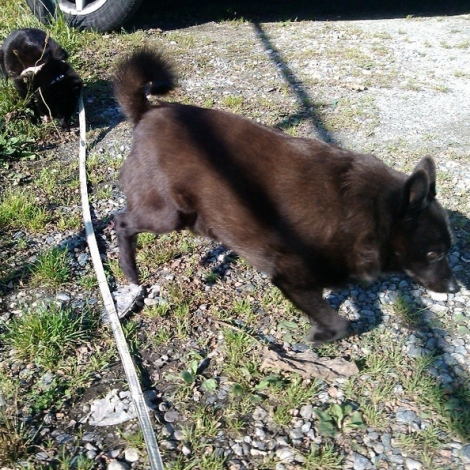 I once called out the window of my car to a man walking a Schipperke, frantically gesturing at Suki while saying, “I have one too!” He then was also very excited about that so J and I piled out of the car just to let our Schips meet and talk about the breed.

Another man was absolutely enamored with Suki because she reminded him of the Schipperke he used to own many years ago. He told me how in the morning they would let her out, then she would make her way down to beach where she would find boaters that would pick her up and take her sailing with them. He said he would go to the beach sometimes and see her way offshore at the bow of someone’s boat. She would do this all day, hitching rides with people, then as the sun started to set the boaters would drop her off and she would make her way home for dinner.

Some of the stories are shorter. Like last weekend in Vancouver when two people stopped to tell me that they used to own Schipperkes, and how much they loved those dogs. I was feeling a bit overwhelmed in the huge mall so we didn’t have a long conversation, but it’s still a case of two complete strangers in a big city connecting over a dog.

Some of the stories are only endearing to me. I had a woman approach me to tell me about her friend’s two horrible Schips that ate the wallpaper. I laughed. I’m not sorry. Considering her friend had not one, but two Schips I’m confident she would have laughed about it with me.

I had man cross a beach just to meet Suki and tell me about his friend’s Schip that he adored and would take mountain biking. This little dog had left a huge impression on him even years after she was gone. Seeing Suki took him back to those memories and made his day.

At a fair a woman at a booth excitedly recognized Suki. She had no idea what breed Suki was, but instantly recognized her as being one of the dogs from her childhood. She told me about how she had grown up in Belgium pre-WWII, that her and her siblings would swim out in the canals to jump off barges, and would be chased by little dogs just like Suki. She hadn’t seen one of those dogs since her family fled to Canada to escape the war. Seeing Suki took her back to those fond memories of her childhood.

These are all stories that are precious to me for different reasons, and I never would have heard them if I didn’t have Suki with me. Purebred dogs bring people together, and that’s just another one of the reasons that- 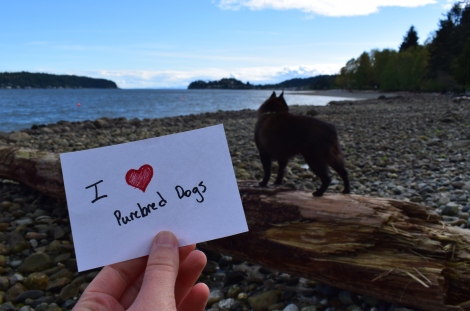 3 responses to “Thoughts on Walking with a Purebred Dog”

He's not a big fan of the waterfall noises. #schipperke #soschipperke #lifeofaschipperke #schipperkesofinstagram
I've been trying to focus on what I have, but I'd be lying if I said I wasn't disappointed. I've wanted to do herding for a very long time. Suki got her HIC, but due to various circumstances we never got to try lessons or take it any further. When this all started I was in the process of setting up a way to herd with Roe, even just once a month (the challenge of living in a landlocked area). But it's on the backburner again. I know Roe doesn't care. He's happy as long as he's doing something, whether that's a sport or hiking or just solving puzzles at home. But I wanted it, and as much as I try to squash the feeling down there's a level of disappointment at postponing it again. It's hard not to feel like it's never going to happen, that it'll stay on the wishlist until Roe is too old to herd too. But maybe it's good to give voice to our disappointment. Then pick up, look for something good, and move forward. What are you doing for training and enrichment right now? I realized I've completely forgotten how to do sit at home training. And it shows, considering Roe has like zero obedience at home but is an all-star out hiking where I did a ton of training lol. I have so many puzzles and enrichment things from Suki, including two books on advanced brain games. So I think I'll focus on working our way through the books. #schipperke #soschipperke #lifeofaschipperke #schipperkesofinstagram
Boop! #schipperke #soschipperke #lifeofaschipperke #schipperkesofinstagram
%d bloggers like this: