Do you like recipes that are fast, easy, and cheap? Then this is your kind of broth. I don’t know about you, but broths that use an entire good chicken, cook it down to mush, then throw it away and put new shredded chicken back in for the soup bother me. Similarly, vegetable broth that garbages entire carrots, sticks of celery, and quartered whole onions just seems so wasteful!

Enter, scrap broth. The less appealing parts of the veggies, the parts normally just thrown in the trash, make fantastic broth to use as a base for soups, stews, casseroles, or as a pour-over for your dog’s food. They have just as much nutrition (or in the case of carrot peels, more nutrition) as the more appetizing parts of the plant, they just don’t look as nice. This makes them fantastic for recipes where the nutrition is cooked out of them and suspended in liquid.

You can use almost anything as the base for scrap broth. Carrot peels, the ends of a carrots, onion skins, the ends of garlic cloves, celery leaves, the celery base, fennel scraps, ginger peels, or those dried out mushrooms you had the good intentions of using but ended up leaving in their paper bag until they became shriveled husks of their former selves. Unless they’re moldy or slimy, then toss them. Dried, good. Moldy and/or slimy, bad.

The only things you don’t want to use are brassicas/cruciferous vegetables, which will give your broth a weird aroma a bit reminiscent of farts. Unless you like that, in which case I guess go for it. Brassicas are things like broccoli, cauliflower, turnips, radishes, cabbage (all types), Brussels sprouts, kale, kohlrabi, and bok choy. Also if you plan to give the broth to your dog leave the onion skins and garlic ends out. For this batch I used celery ends, celery leaves, carrot ends, dried crimini mushrooms, the ends of a few sweet potatoes, the top of a parsnip, the base of a radicchio, and some ginger peelings.

Broth is extremely easy to make. You just throw everything into a pot, splash in a bit of apple cider vinegar and salt (optional, but it helps pull nutrients out of the veggies), fill the pot with water, cover it with a lid, and simmer for at least an hour. That’s it. Alternatively you can also use a crockpot and come home at the end of the day to fresh broth ready to use for dinner.

Once it’s cooled a little set a fine mesh strainer into a bowl and strain out the veggies. Do not forget that it’s the liquid that you want to keep and strain it into the sink out of habit. I’ve done that once. You just sort of stand there feeling really stupid as you watch your efforts go down the drain. Literally. 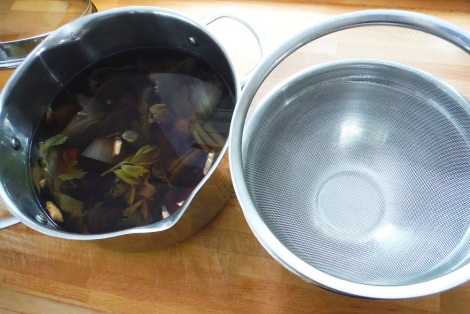 You can use it for everything from soups to stews, replace the water with veggie broth for extra flavourful rice or quinoa, or add it to your dog’s food. If you feed a dehydrated pet food you can use this instead of water. It can also be frozen to use later.