Yesterday Suki hit nine years. Nine! It simultaneously feels like she shouldn’t be that old, but that I’ve never not had her in my life. To celebrate we went for a walk through Sprockids Bike Park and she got to play on the equipment.

This year’s loot was a box of Honest Kitchen Wishes and a West Paw Design Tux. 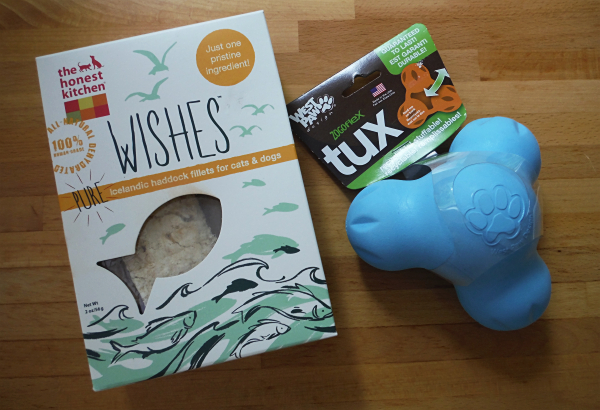 Then there were the cupcakes. I had a big bag of carob powder from my hot “chocolate” mix for dogs so I decided to make classic looking birthday cupcakes for her this year. Well, almost classic. Instead of carob buttercream I topped them with peanut butter frosting.

I decided to try something new and used oat flour instead of the usual whole wheat. To make the flour just pour rolled oats into a blender and chop ’em up until they become a fine powder. Because the oats still have the bran attached it will have the consistency of whole wheat flour, but be light almost like refined white flour. Throw the oat flour, carob powder, baking soda, and salt into a medium bowl and whisk them all together.

Add all the wet ingredient into a larger bowl and mix. I wrote down one large egg in the recipe, but the photo has two because I used bantam eggs. It’s not pictured, but I ended up having to thin the batter with a bit of milk. Feel free to use water or even yogurt instead though.

Then, add the dry ingredients and beat together until combined. We’ll skip this picture because let’s face it, chocolate and carob batters aren’t the most visually appealing.

Fill your cupcake thingies (that’s a technical term) about 3/4 full. Or around there. They don’t rise a huge amount so there’s not much risk of overfilling. If there’s any excess batter just eat it. Or wait, never mind, I didn’t tell you to do that. Something-something about salmonella. You probably shouldn’t let your dog lick the mixing whisks either.

For the frosting I knew I needed a dry binder type ingredient to replace the icing sugar. Coconut flour would probably be best, but I didn’t have any on hand so I used the oat flour instead. It actually worked pretty well! Just toss in the honey, peanut butter, and flour and beat with an electric mixer until fluffy. Start with a small amount of flour and add more until you like the consistency.

This recipe makes 6 cupcakes, so double or triple if you’re hosting a party.

1. Preheat oven 175°C (350°F).
2. Pour rolled oats into a blender and grind until a fine powdered consistency.
3. Add the oat flour, carob powder, baking soda, and salt to a medium bowl and whisk together.
4. Melt coconut oil and honey together, then add remaining wet ingredients and beat together.
5. Slowly add dry ingredients and beat until just combined.
6. Fill cupcake forms 3/4 full.
7. Bake for 25-35 minutes, or until a toothpick inserted into the center comes out mostly clean (there may be a few crumbs stuck to the toothpick).

1. Beat peanut butter and honey in a bowl until combined
2. Add oat flour a small amount at a time until desired consistency is reached.
3. Frost cupcakes and enjoy! 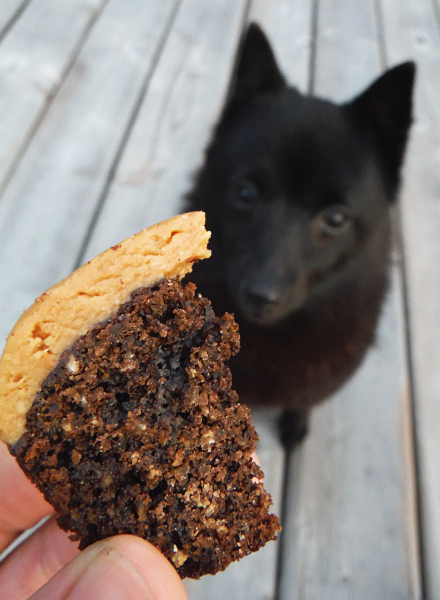