Suki started wearing her Buddy Belt full time September 25, and the more use it gets the more reasons I find to like it. I bought this harness before the new model was released, and knowing I would want to upgrade to the improved fit I decided to really test this harness to its limit. Except that I haven’t, because so far it hasn’t had a limit. It’s been scraped against rocks and branches, dunked in the ocean, covered in mud, submerged in soapy water, forgotten out in the sun (and once overnight), and then heavily conditioned to keep up with all the abuse it’s taken. The more this harness is put through, the better it gets. 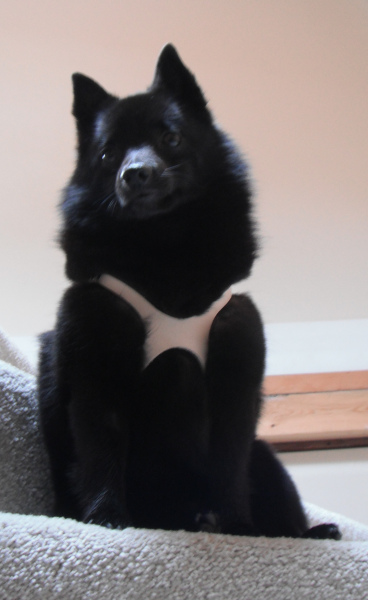 And now, six months later, it looks like this: 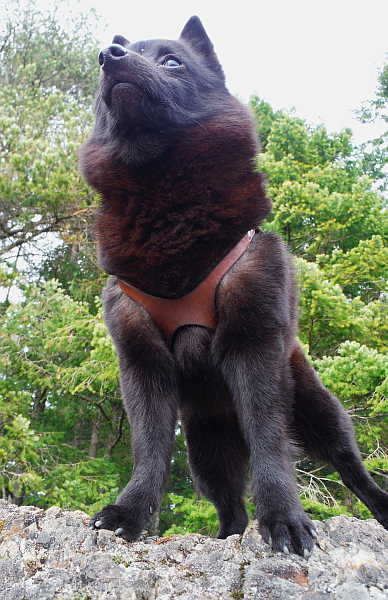 The fantastic thing about natural leather is that every mud puddle leaves a splatter print, every day spent in the sun (or rain) darkens the leather, and every rock or tree your dog scrapes past leaves a mark to remind you of all the fantastic times you’ve spent together. Even the oils from your dog’s coat and your hands contribute to the patina. It becomes a unique expression of everything your dog has done and everywhere you’ve been. 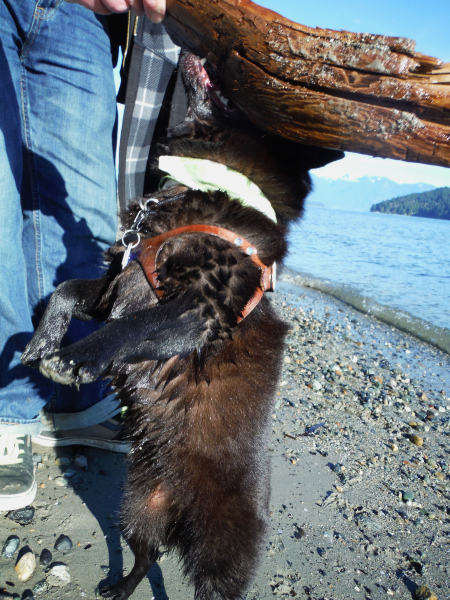 Here’s an up close look to show the variations in colour that have developed on the harness. 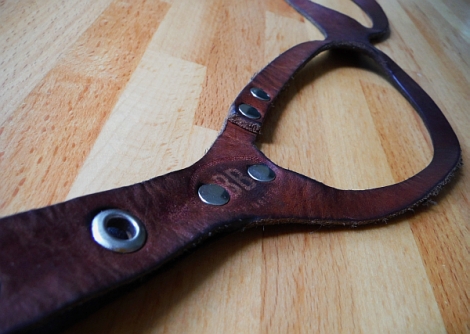 To maintain the leather I periodically wipe it down with a damp cloth and condition it with neatsfoot oil every few months. Prior to conditioning it I wash it with Dr. Bronner’s pure castille soap. That’s it! Leather doesn’t absorb muck into the fibers like nylon does, so it’s easier to keep clean. 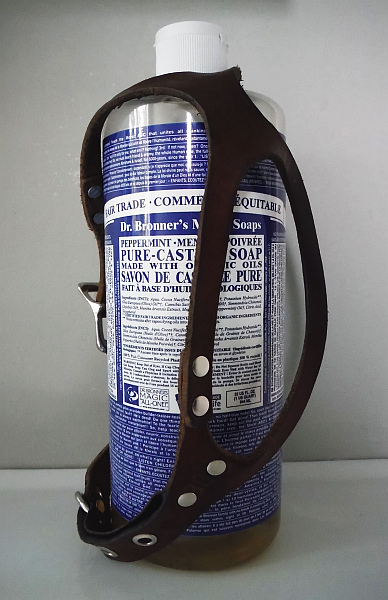 The first thing that drew me to this harness is that it’s made in Canada, but it has more positives to it than that. The leash clip-in point is directly over the shoulders, which provides more control than a standard harness that sits lower on the back. While I might consider using a more traditional style harness for activities that require heavy pulling (such as an x-back for bikejoring), for everyday wear this harness has been fantastic. Considering the non-standard cut it still has a very classically rugged dog look to it that I really like. Suki’s Buddy Belt looks right in its element when she wears it while keeping an eye on her flock. 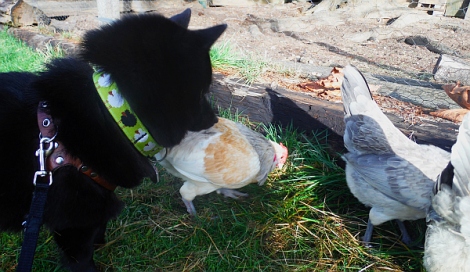 When I first put it on Suki I wasn’t sure about it. It was very stiff, and it chaffed her underarms quite a bit. We took short walks with it at first, and gradually it began to break in. Between daily use and conditioning it with neatsfoot oil it’s turned from a stiff chunk of pink leather into a buttery soft dark brown harness. This isn’t the type of harness that fits perfectly the first time you put it on your dog, but with use it will form to your dog’s body. If your dog has very sensitive skin and the chaffing doesn’t get better with wear, the company makes extra soft leather covers for the underarm straps.

A nice feature to the cut is that the chest plate doesn’t extend past the sternum, so it spreads the pressure over the strongest part of your dog’s body. The underarm straps are cut in a circular shape rather than going straight around the chest, so it provides room behind the arms for movement while keeping pressure off the unprotected area between the ribs. I’ve added a red X roughly over where you don’t want a harness to sit, and as you can see the Buddy Belt’s chest plate is right in the middle. 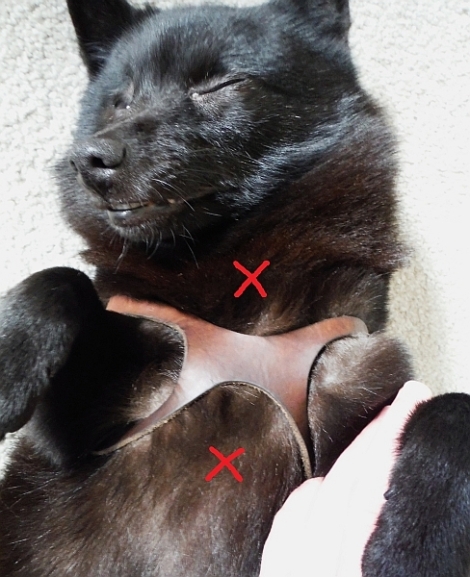 The low cut of the chest plate makes the Buddy Belt a great choice for activities like nosework or tracking, where your dog needs to be able to put his head down to sniff without having pressure put on his throat. 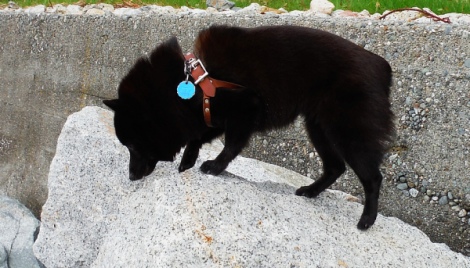 The harness is unobstructive even when covering rough terrain.

While I’m not a fan of front-leader harnesses, once the leather has softened it’s easy to get a D-ring on a Buddy Belt to use it as one. Alternatively a permanent harness ring could be added to the chest plate, as leather is very easy to modify.

I did not try this modification for long because I feel like front-attach harnesses are detrimental to structural health, so I can’t comment on how the harness would hold up to long-term use like this. An interesting thing I noticed is that while Suki could not physically pull as hard with the leash attached to the front, the amount she attempted to pull seemed to be higher than when the leash was attached over her back or to a collar. If you do decide to use a Buddy Belt like this I would recommend using a double ended leash and only applying pressure to the front clip for minor corrections. 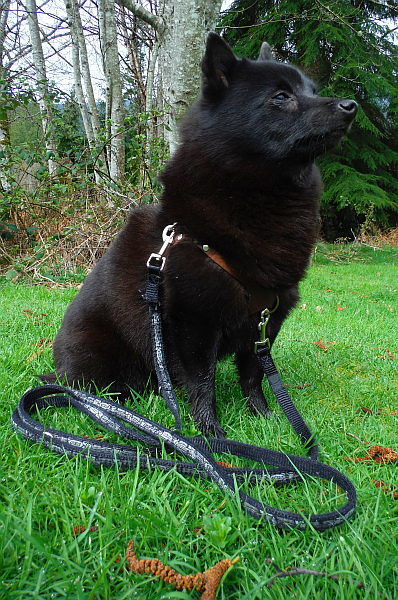 As you can see, Suki is not a fan of front-attachment harness either

I did feel like the chest plate was a little too wide and could have been a bit longer, and that the arm holes were a bit too small, but the updated model has fixed all those complaints so I can’t think of a single thing I would want to see improved now.

Overall I think this is a fantastic harness. You can find a store or purchase your own from their website. 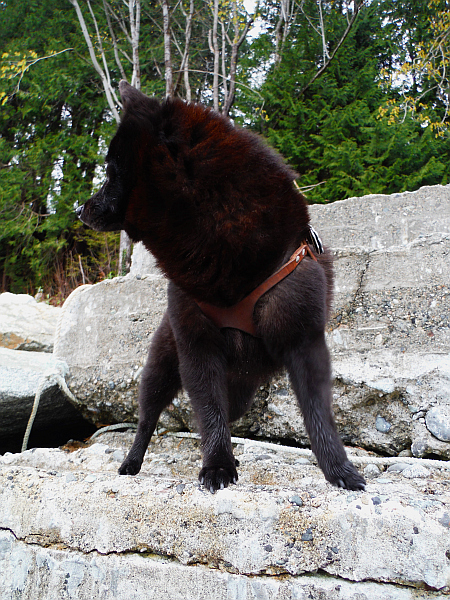