How to Make a Poppy for Your Pet

Did you know Schipperkes were used as military messenger dogs? I always buy a poppy for myself each year, but I’ve never really thought of putting one on Suki. While it’s unlikely dogs share our symbolism of the poppy, that doesn’t mean they can’t join in the solidarity of wearing one. The only problem is they’re far more likely to injure themselves on the straight pin. Originally I was going to swap the straight pin for a lapel pin, but because Suki’s harness is leather I decided to opt for a design that wouldn’t leave a permanent mark. For this project you’ll need a poppy, Velcro strips (I used 1/2-inch), black thread, and a sewing needle.

I don’t know how to do fancy low-profile stitches, so I opted to just hide the knot. Start out by putting the needle through the backside of the Velcro, then back again so it’s both entering and exiting through the same side.

Next pass the needle through the backside of the other Velcro strip. 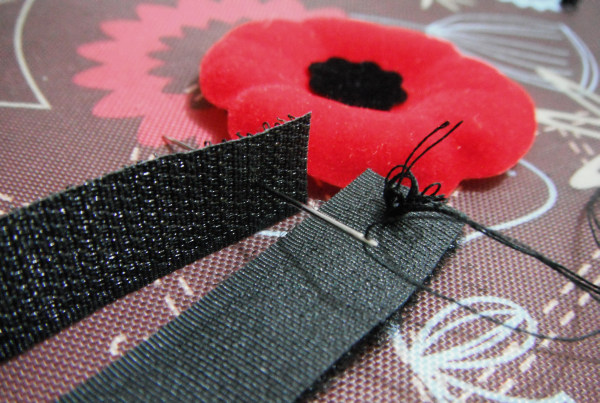 When pulled tight the backs of the two pieces should touch with the thread knot sandwiched in the middle. I did a few extra stitches around the Velcro to keep the strips from shifting.

Then pass the needle through the red and black pieces of the poppy. Be careful not to jab yourself or stitch the black piece on off-centered. 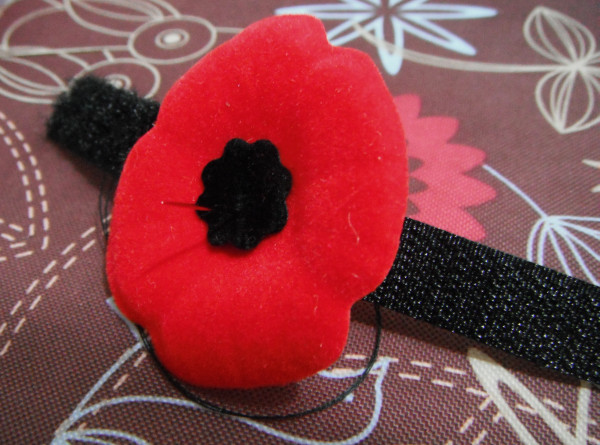 Then just measure the Velcro around your pet’s harness or collar, cut off any excess, and voila. A safe poppy for your pet to wear.

On our first walk the poppy slowly fell down her shoulder strap, but I wrapped the Velcro tighter and it has held in place. So far the design is holding up, and it hasn’t gotten muddy from her running around.

Now you can both show your support for veterans, the two- and four-legged kind.