Today marks the fifth week of our C25K, or Canine25K as I’ve been calling it, so it’s well passed time to weigh in on how we’ve been doing. In the past when I’ve tried to take up running I would go all out until I couldn’t run anymore, and I’d end up burning out after a few weeks. This time I decided to try the Couch to 5K program, and it’s going so much better. I even managed to convince J to try it too! There were a few times where one of us needed a bit of coaching because we were just done with it, but overall it’s been great.

A few weeks in though I noticed Suki licking at a scrape on her back paw. I assumed she had done it scrambling over rocks on our hike, soaked it for any possible infection, and put her cone on so she couldn’t irritate it further. It started to look worse though, and another one showed up on her other back paw, which is when I realized they were from running on asphalt. I had been trying to keep her on the grass at side of the road, but she prefers the pavement for some reason and she’s very stubborn when she wants something. During normal walking the back of her pad doesn’t make much contact with the ground, so it’s still soft and uncalloused and it didn’t take much to scrape up. 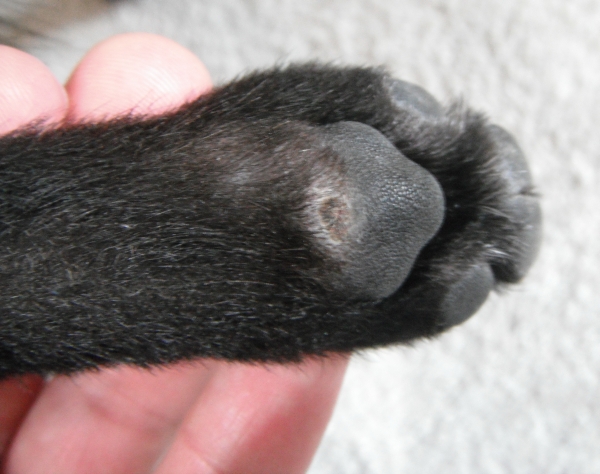 I had been avoiding putting her boots on because they’re fleece, and even though we run in the evening I worried she would get too hot. After seeing the blisters/scrapes though I pulled her boots out, and as usual I regret not using them sooner. Before the boots she lagged quite a bit. I assumed this was because her legs are shorter, giving her a slower running pace. Once she had some foot protection though she ran beside me or led the charge. When will I learn that Suki really does love her boots? For now I’m only putting them on her back paws so her front paws can still get some cool air, but if I can actually manage to find a set of mesh boots I’ll cover all four paws.

Do you run with your dog? If you’re thinking of starting I highly recommend the C25K, especially if you’re like Suki and I and have a tendency to push yourself too hard in the beginning. We’ve been using this free app to keep track of when we should be running and walking. It’s main problem is that it’s very quiet, so you need to hold the phone or you’ll miss the notification telling you when to switch up (I imagine this would be moot if you use headphones though). Also for some reason once the cool down is over it exits to the main selection, then you need to reselect that day and let an additional 12 seconds go through before it registers that you’ve finished the run. It’s major plus is that it tells you when to turn around at the halfway point, so I’m willing to ignore the minor design flaw and bug for that feature.