Sure he has none of that insane Belgian temperament, but he’s more or less the right colour and tiny and that’s all that matters right? 😉

Okay, so there’s not actually such a breed as a Teacup Tervuren and I hope there never is. Ted’s really a Pomeranian, but I couldn’t resist making the joke. I’ve also been (jokingly, and never in public lest I put a terrible idea into someone’s head) calling him a Tervke or Tervurenke, a play on Schipperke and Tervuren. -Ke just means little, so Tervurenke is literally Little Tervuren. Despite technically being an older breed than the Groenendael (the black Belgian Shepherd) the Schipperke is often compared to it like a miniature version, so with my love for the Belgian breeds and Ted being sable like the Terv the comparison was too much to resist. Yes, even though Poms and Tervs aren’t related. I never claimed it made sense.

Ted, or Teddy, has been staying with us for about two weeks now. He was originally an unexpected gift to an older lady, but recently she was unable to care for him properly anymore which is how he ended up with us. He was not neglected, he’s not a rescue, and I don’t think any blame or criticism should be placed on his owner for deciding to do what was best for him. That’s about all I’m going to say on the matter.

There is just one problem, and that is that he was spoiled! I’ve estimated that he should weigh about 5 to 7 pounds, but when I first weighed him he was 13 pounds! He’s surprisingly picky though (hence the “Terrible” before his name), and has refused to eat the food he came with. I’ll put a bowl of the kibble in front of him, he’ll sniff it, maybe pull a few pieces out, then give me a look that says he’s very disappointed with me. I recently learned he had been eating mostly leftovers, and he is so stubborn that he would rather go hungry than eat kibble. Between all the exercise he’s been getting and starving himself he lost nearly a pound in the first week.

After the first week I introduced him to the same food Suki eats. I had been worried about giving him homemade food right away. Partly because I was worried an abrupt change in diet alongside a change of environment would upset his digestive system, and partly because he seemed especially picky about vegetables and I didn’t want him to be living off meat and carbs alone. His first day here I gave him half an egg and some broth with his kibble which he gobbled down, but when I tried adding fruit and oatmeal to the egg and kibble the next day he turned his nose up at the entire bowl. Turns out I had nothing to worry though; when it was veggies instead of fruit (and no kibble) he tucked into the homemade grub and even went back to make sure the bowl had been properly licked clean. If there’s any kibble mixed in though he’ll refuse to eat anything.

Unfortunately when I branched off from the basic grub into a turkey and salmon meal, the digestive upset I had been concerned about did happen. I won’t go into the nasty details, but let’s just say it was bad enough that I consented to having his fur chopped at with scissors. I handed the scissors over to my mother, who was walking with us at the time, because she has experience clipping her own dog. Unfortunately instead of chopping out just the really bad pieces she chopped all the soiled hair off before I realized what was happening. Thankfully it turns out the Pomeranians seen in the show ring are actually clipped up, so by blending up the rest of his hair I was able to salvage his lederhosen* and make him look more like a Pom instead of a Peke at the same time.

*Poms are German, so I call his buttfluff lederhosen instead of culottes or breeches. 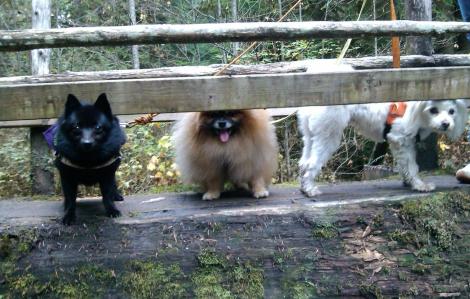 Ted’s temperament is wonderful. When he’s inside he’s content to do little more than sleep, but as soon as he hears the closet door open he’s there ready to go out. I expected him to have a hard time keeping up with Suki but he trucks along like a Ural. His two loves in life are snack food and being outside. He’s even gone on a few light hikes and he excelled at it, scrambling over rocks and roots like he’d been doing it his whole life. He starts to tire around the 1.5 hour mark, but I think once he’s slimmed out and built up a bit more muscle he would be a great little mountain dog. We’re most likely not going to keep him but I just wanted to introduce him because he’s so cute. If I can convince my mother to take him, or if he does end up staying here at the barnhouse with us, I’ll be sure to keep updating on his weight loss progress.