On Monday Suki turned seven years old. Seven! Sometimes I forget that she’s basically middle aged, as she looks and acts like she’s still a puppy. For those not following on facebook, we ended up “celebrating” at the vets with blood tests and a case of hypoglycemia. She’s fine now though, and she was even able to have a slice of her cake after dinner. This recipe isn’t something I’d recommend giving to your dog every day (honey, while natural, is still basically pure sugar), but for special events like birthdays it’s a great way to celebrate with your dog. 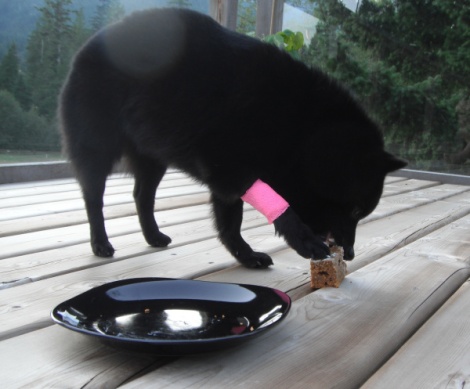 I was once asked if I thought Suki could actually understand the concept of birthdays. It was delivered in a tone that insinuated it was silly to celebrate something that the receiver did not understand. I was taken aback by the question at the time, and I think I just mumbled something about how there’s no way to know for sure what dogs do or don’t understand. Now, more prepared for that sort of thing, I would probably ask them if they celebrated their kid’s first birthday. I don’t see how my dog’s joy in tearing open a wrapped present or eating a slice of cake is somehow tarnished simply because dogs don’t celebrate birthdays without human involvement. Personally, I don’t see why it’s silly to include one’s dog at all. They are such an intrinsic part of our lives, it only seems normal to me to include them in our human celebrations. After all, our dogs include us in their canine celebrations of everything each and every day.

I had adapted this recipe from a delicious banana bread I found on Pinterest. I cut the baking soda in half to reduce the sodium content, but it does make the cake a bit more dense so if you’re going to be making this just for yourself (sans icing it’s a delicious breakfast loaf) add in the full teaspoon.

Pumpkin, ginger, and cinnamon are all great for digestion. Proceed with caution though; if your dog’s digestive system is sensitive to new foods he might still find this cake difficult to handle. If you’re worried about any unpleasant… Uh… Side effects of giving your dog a piece of cake leave the icing off and just give a small portion. If your dog (or you) prefer grain free, while I haven’t personally tried this recipe with alternative flours I imagine it would work just fine. Just adjust accordingly, and if you do try it please let me know so I can make a note of it. 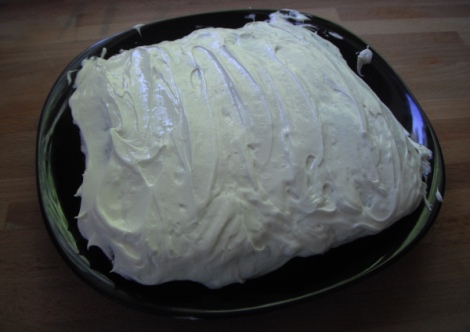 Try to resist looking at the remaining pumpkin in the can and thinking, “that’s not much, I’ll just add it.” I learned the hard way that baking is a very exact thing. If you add the extra pumpkin you’ll end up with an extremely dense, flat, and almost too moist cake. While it’s still equally nutritious and has good flavour, the texture is a little off-putting. You could bake it for hours and it will still feel like it’s raw in the center. Don’t be like me and end up having to bake two cakes.

1. Preheat the oven to 325
2. Add the coconut oil/butter and honey to a mixing bowl, melt them together.
3. Add the eggs and mix.
4. Add the pumpkin and vanilla, mix.
5. Add the salt, cinnamon, and ginger. Mix.
6. Add the flour and stir everything together.
7. Add the baking soda to the hot water then thoroughly mix into the batter.
8. Pour the batter into a greased baking dish and bake for 60-65 minutes, until a toothpick inserted into the cake comes clean.

Add everything to a mixing bowl, beat together, taste and adjust to your liking, then spread over the cooled cake.