When I went on holidays this year I dehydrated all of Suki’s meals. Since ovens tend to be pretty busy during holidays, it was nice not having to feel like I was taking over someone else’s kitchen while they needed it.

When dehydrated, ground beef looks and feels a bit like gravel. Dry-cook the raw meat in a non-stick pan. Oil and fat tend to go rancid quickly, so it’s important not to use any when cooking food for dehydrating. Once cooked, transfer the meat to a fine mesh colander and rinse with hot water to drain off as much fat as possible. Then just transfer to your dehydrator, set the temperature to high and leave it until it’s dry. To check it, break the larger pieces apart to make sure it’s dried completely through. Chicken is a bit easier; just bake in the oven, shred or chop into small pieces, and transfer to the dehydrator (if there is grease on the meat rinse under hot water like the ground beef). If I were dehydrating the food to take on a backpacking trip I would probably add a small amount of fat (such as butter or coconut oil) to the meal right before adding the hot water to make up for the missing fat in the meat.

Vegetables are the easiest item. Just chop and line on the trays. While not necessary, I steamed the carrots lightly first to speed up rehydration time. Sweet potatoes and regular potatoes are best when cooked before being dehydrated.

While it seems pointless to cook and dehydrate something that is already shelf-ready like pasta, it’s actually an important step to creating an instant meal. Cook the pasta like you normally would then spread it out on the trays and dehydrate it. Small, thin pieces of pasta like macaroni or chopped up spaghetti are the best choices because they’ll rehydrate faster than thicker noodles like fettuccini or penne.

I couldn’t find any information on oats, so I set about experimenting with various techniques. The cook-then-re-dehydrate step seems almost pointless for oats because they cook so quickly already. At first I added hot water to regular rolled oats, but the resulting rehydrated food was somewhat gummy in texture and I questioned how cooked it really was or how digestible it would be like that. The method I ended up with is to blitz however much you need in a blender until it’s a fine powder before divvying it out into the plastic baggies. When the time comes to feed it to your dog, add enough water to cover, stir, and it will rehydrate almost instantly. I expected the resulting rehydrated ground oats wouldn’t be overly palatable, but texturally it was similar to cream of wheat cereal and when I offered a spoonful to Suki she gobbled it up and wanted more.

My kitchen table ended up being taken over by dried food, plastic baggies, and measuring spoons. Dedicating a specific spot in your house to mixing the food makes it a lot easier. 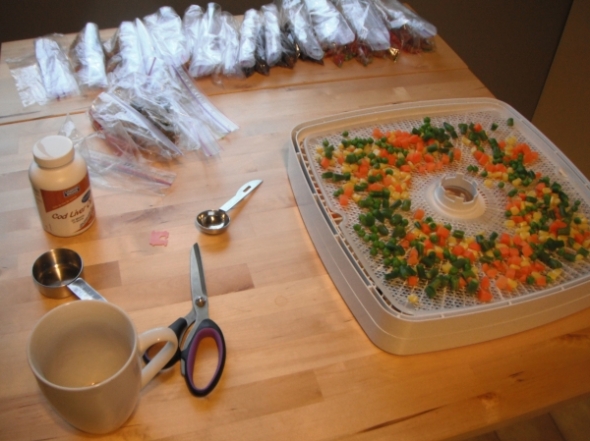 A big cup of coffee is also important. Caffeine contributes to not tearing your hair out in frustration.

I lined the partially completed baggies along the back of the table, rolling the tops together so that the different meals were easily found each time I needed to add a new ingredient. When a meal was completed it was moved to the bag it would be travelling in to keep the table clear.

I had assumed texture wouldn’t be important to Suki, but it turns out it is. The mushrooms, cauliflower, and broccoli all rehydrated like little pieces of rubber and she refused to eat them. In the future I’ll be grinding these ingredients into powder after they’ve been dried.

The one snag I ran into was miscalculating how much food I would need, resulting in numerous emergency runs to the grocery store. I had made the mistake of assuming everything would roughly half in size when dehydrated, but based on the trouble I had food shrinks much more than that. To figure out exactly how much of a dehydrated ingredient you’ll need measure all the food after dehydration, divide the total volume by the number of ¼ cup portions that went in pre-dehydration, then type the resulting number into a cups-to-table(or tea)spoons converter.

For example, let’s say ingredient X equals 1 cup after dehydrating and 4 cups (or 16 ¼ cup portions) of food went into the dehydrator. 1/16=0.0625 cups, which converts to 1 tablespoon.

I found the rehydrated meals end up being a bit soupy. Whether this is just due to my terrible guesstimation skills or unavoidable, I’m not sure. Suki didn’t mind the extra water in her food, and for a backpacking trip it could actually be a good way to make sure your dog is getting enough water intake. If your dog doesn’t like the extra water in his food, my recommendation would be to grind everything into a fine powder so that not as much water is needed to rehydrate it. Test a few techniques out at home to see what your dog likes best.

If you’ve fed or feed your dog dehydrated commercial food, you might be wondering why the stuff I made looks so different. The reason for this is technique. Because I’m working on a small scale and am able to carefully measure everything out, I don’t need to worry about not getting enough of one ingredient into each bag. With a large company they likely dehydrate everything after it’s been mixed together, and to ensure enough of each ingredient makes it into each bag they blend the food together into a big smoothie. If they left all the ingredients whole one bag might be almost all oats while another might be almost entirely salmon.  It’s a careful mixture; enough ground food to ensure adequate ingredient composition but enough whole food pieces to satisfy the visual aspect for the buyer. Visually the food I made might be more appealing, but they’re technically the same thing.

For cod liver oil I bought a bottle of jell capsules. Three capsules are roughly equal to one teaspoon, which works great for me because I feed Suki three meals a day and she needs one teaspoon. If your dog eats twice a day it won’t hurt to have a little extra oil at one meal and a little less at the other. After the meal has rehydrated and cooled down, carefully puncture the top of the capsule and squeeze the oil over the food. If you don’t have access to a knife or scissors the hot water will be enough to melt the capsule, but it’s best to avoid this if possible because cod liver oil is best if not heated.

To make life easier I pre-portioned out Suki’s kelp and nutritional yeast into a weekly medicine dispenser. That way I knew she was getting the right amount each day, but I didn’t need to tote along a measuring spoon. It’s important not to include these ingredients in the meal baggies, because like cod liver oil they are best when not heated.

During the drive, if I was uncertain whether I would have access to hot water when Suki is accustomed to eating I would add the water before we left. The food won’t go bad in just one day, and it removed any possible stress of finding a place to stop. In a pinch I imagine a coffee shop would be a good place to ask for hot water.

Like everything, getting good at creating dehydrated meals takes a bit of time and personal trial and error. Hopefully what I’ve written will set you off to a good start! Two resources that I used and found very helpful were http://dehydratingwaybeyondjerky.blogspot.ca/ and http://www.backpackingchef.com/dehydrating-food.html , and I highly recommend referencing them for specific ingredients you might not be sure about. Above all else, try not to stress too much if things go awry. I few days, or even a week, of not quite properly portioned food isn’t going to hurt your dog.